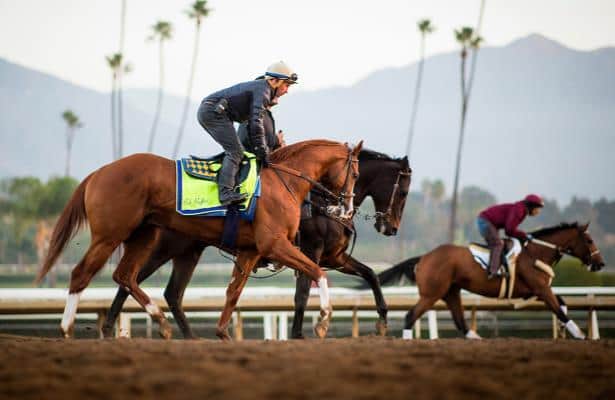 Searching for a solution amidst a spate of equine deaths in training and racing at Santa Anita Park, track operator The Stronach Group on Thursday announced a "zero tolerance" ban on race day medication at Santa Anita and Golden Gate Fields, another California track.

The news came hours after a 22nd equine fatality was suffered in racing or training since the current Santa Anita meet began Dec. 26.

The decision includes the popular anti-bleeding drug Lasix, which prevents horses' airways from clogging while running at higher speeds. But its detractors insist healthy horses shouldn't need Lasix to race, and it has been suggested the medication could cover a mixture of other drugs in a horses' system.

Calling it a "watershed moment," Belinda Stronach, chairman and president of The Stronach Group, published the following letter which also indicates changes in rules for whips to only be used as "a corrective safety measure."

At a press conference totaling about 30 seconds, Tim Ritvo, chief operating officer of The Stronach Group, said further comment will not be made at this time.

What has happened at Santa Anita over the last few weeks is beyond heartbreaking. It is unacceptable to the public and, as people who deeply love horses, to everyone at The Stronach Group and Santa Anita.

The sport of horse racing is the last great sporting legacy platform to be modernized. If we expect our sport to grow for future generations, we must raise our standards.

Today, I’m announcing The Stronach Group will take the unprecedented step of declaring a zero tolerance for race day medication at Santa Anita Park and Golden Gate Fields. These Thoroughbred racetracks will be the first in North America to follow the strict International Federation of Horseracing Authorities standards.

We have arrived at a watershed moment. The Stronach Group has long been a strong advocate for the abolishment of race-day medication, but we will wait no longer for the industry to come together as one to institute these changes. Nor will we wait for the legislation required to undertake this paradigm shift.  We are taking a stand and fully recognize just how disruptive this might be.

This mandate encompasses a complete revision of the current medication policy to improve the safety of our equine and human athletes and to raise the integrity of our sport.

These revisions comprise best practices currently employed at racetracks around the world:

• Banning the use of Lasix.

• Complete transparency of all veterinary records.

• Increasing the time required for horses to be on-site prior to a race.

A substantial investment by The Stronach Group in diagnostic equipment to aid in the early detection of pre-existing conditions.

Horses in training are only allowed therapeutic medication with a qualified veterinary diagnosis.

Additionally, it is time to address the growing concern about use of the riding crop. A cushion crop should only be used as a corrective safety measure. While we firmly believe our jockeys have not purposely been mistreating their mounts, it is time to make this change.

These modernizations are in addition to the previously announced commitment to the continued engagement of outside experts to regularly review our dirt, turf and synthetic courses for consistency, composition and compaction to create the safest racing surfaces in the world.

We will be continuing our daily conversations with industry stakeholders to further define these transformative guidelines. But make no mistake: these changes will be implemented. The time to discuss “why” these advancements must take place is over. The only thing left to discuss is “how.”

There are some who will take a stand and tell us that it cannot be done.  To them we say “the health and welfare of the horses will always come first.” We also say, "not only can it be done, it is what we are doing."  Racing at Santa Anita and Golden Gate is a privilege, it is not a right.

Ultimately, we recognize the owners and trainers of these horses have the final responsibility to assess their fitness for racing and training. Our goal is to make every resource available to aid them in that determination. We are all in this together to make the horse the first priority.

Our COO, Tim Ritvo, has been a horseman for almost four decades. As he said, “The time has come for this industry to evolve. It must do so for the sake of the horses and the people who depend on this sport for their livelihoods. Moving to international standards will help to set the right foundation for racing and fairness. We love the sport of horse racing and want it to succeed today, tomorrow and long into the future.”

We’ve spoken with the California Horse Racing Board and they will be holding a meeting on March 21 at which the situation at Santa Anita Park will be addressed. In the interim, Chairman Chuck Winner told us he personally appreciates the initiatives that The Stronach Group announced today. The Chairman said, “The safety of horses and riders has been, is, and will be the primary concern of the CHRB. The CHRB has been working with The Stronach Group and the various stakeholders to achieve a common objective, which is the best possible conditions for the health and safety of our equine competitors.”

Organizations who advocate for animal welfare have also affirmed their support for these measures. Kathy Guillermo, Senior Vice President for PETA said, “PETA thanks Santa Anita for standing up to all those who have used any means to force injured or unfit horses to run. This is a historic moment for racing and PETA urges every track to recognize that the future is now and to follow suit. This groundbreaking plan will not bring back the 22 horses who have died recently, but it will prevent the deaths of many more and will set a new standard for racing that means less suffering for Thoroughbreds.”

These initiatives are a seismic shift in how the sport has been conducted for centuries. We are pleased that Stuart S. Janney III, Chairman of The Jockey Club, which has long supported the Horseracing Integrity Act, said, “We applaud The Stronach Group for its announcement today to effect sweeping changes at Santa Anita, which would bring them on par with the strict standards seen in major international racing jurisdictions.”

Del Mar Thoroughbred Club, has also voiced their agreement with these new changes. Joe Harper, CEO said, “Del Mar has and will continue to support discussions and implementation of measures that enhance the safety and welfare of our athletes. We are committed to working with Santa Anita, The Stronach Group and other industry stakeholders to continue to improve.”

We recognize this will impact our field size as horses and horsemen adjust to this new standard.  There will be horses that will not be able to race because they have required medication to do so. For those horses, we are prepared to dedicate the capital required to rehabilitate, retrain, rehome and provide aftercare for them. They deserve nothing less.

We are taking a step forward and saying, quite emphatically, that the current system is broken. While the cause of the injuries on the racetrack might be varied, they have one thing in common: the industry has yet to do everything that can be done to prevent them. That changes today.