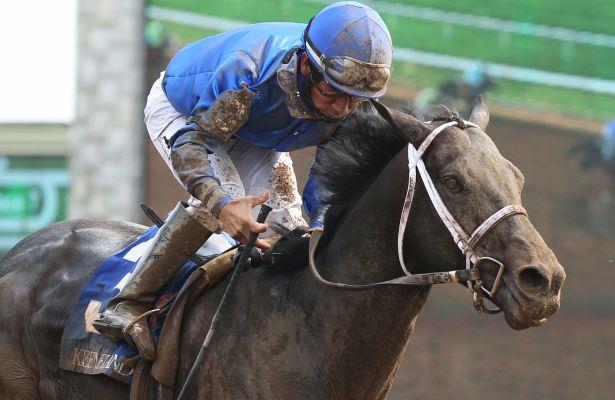 Photo: Coady Photography
Godolphin Racing's Watershed will headline a competitive field of nine in the $125,000 Queens County for 3-year-olds and up, one of two stakes races on Saturday at Aqueduct Racetrack alongside the $100,000 Gravesend for 3-year-old and ups.
Trained by Kiaran McLaughlin, The Bernardini sired horse kicked off his 5-year-old campaign in January at Gulfstream Park winning an optional claiming race. Following a disappointing ninth-place finish in the Grade 2 Mac Diarmida Stakes he returned to win the Grade 3 Ben Ali at Keeneland last April. Next out finishing fifth in the Grade 3 Pimlico Special and a fourth-place running in the Grade 2 Suburban Handicap at Belmont Park, he returned to finish fourth off a layoff last out in the Richard W. Small at Luarel Park on November 11.
The 7-2 morning line favorite, Watershed will make his first start at the Big A with a lifetime record of two wins from five starts at the Queens County distance of 1 1/8 Miles, Watershed will depart from post 3 with Pace Lopez aboard.
Entering off a game second-place effort in the Grade 3 Discovery on November 25 at Aqueduct is Fern Circle Stable's Senior Investment. Trained by Ken McPeek, The 3-year-old son of Discreetly Mine has not visited the winner's circle since last April when he won the Grade 3 Lexington at Keeneland but will make his first start in a non-graded stakes race in the Queens County since winning an optional claiming race at Oaklawn Park in February.
Drawing post 4 at odds of 5-1 on the morning line, Senior Investment will be ridden by Manuel Franco.
Looking to earn his second straight win after capturing the Swatara on November 22 at Penn National is Discreet Lover for owner and trainer Urah St. Lewis. A 4-year-old son of Repent, he has three wins from 13 starts this year with one second and a pair of third-place finishes.
At odds of 4-1 on the morning line, Discreet Lover will depart from the rail with Jose Flores aboard.
Trainer Jimmy Jerkens will enter Securitiz for Centennial Farms. The 5-year-old sired by Tiznow won the Seattle Slew on September and returned to finish sixth in the Richard W. Small last out. Rounding out the field is Backsideofthemoon for Leo O'Brien and Lake Lonely Racing; Alex the Terror for trainer Todd Pletcher and Repole Stable; Kurilov for trainer Chad Brown and Head of Plains Partners and Zanotti for The Strike Racing and trainer Carlos Juan Guerrero.
In the $100,000 Gravesend, carded as Race 7, a talented field of eight runners includes multiple graded stakes winner Green Gratto.
The 7-year-old horse out of Here's Zealous draws the outside post and will carry the highweight of 124 pounds for owner and trainer Gaston Grant. Last out, the fan favorite finished sixth in the Grade 3 Fall Highweight on Thanksgiving Day at Aqueduct, fading in the stretch after taking the lead early in his signature front-running style. Jockey Rafael Hernandez will get the mount.
Finishing second in the Fall Highweight was Amerman Racing LLC's
Threefiveindia, a 4-year-old Street Hero colt seeking his first stakes win. Trained by Chad Brown, Threefiveindia has posted a career high Beyer Speed Figure of 99 three times including his performance in the Fall Highweight and his second place effort in the 2016 running of the Grade 3 Bold Ruler at Belmont Park.
Hall of Fame jockey Javier Castellano will have the mount on the 2-1 morning-line favorite, and will break from post 7.
Also exiting the Fall Highweight is Paradise Farms' Life in Shambles, who finished third that day for trainer Steve Asmussen. The 6-year-old Broken Vow gelding has collected more than a half a million dollars in earnings in 33 starts, with 8 victories to his name, but has yet to win a stake.
At 3-1 on the morning line, Life in Shambles will break from post 3 with Irad Ortiz, Jr. in the irons.

Rounding out the field is Harold Lerner's The Truth Or Else, breaking from the rail for trainer Kenny McPeek with Manny Franco in the saddle; Do Share, a four-year-old Candy Ride gelding coming off a win on December 14 at Aqueduct for trainer Linda Rice, with Junior Alvarado in the irons; David Jacobson owned and trained gelding Chief Lion, who is looking for back to back wins coming out of a score in the Fabulous Strike at Penn National, with jockey Martin Garcia; Great Stuff, trained by Jacobson, with Joel Rosario grabbing the mount; and Charlton Baker-trained Gold for the King, exiting a win in the New York Stallion Series Thunder Rumble on November 29 at Aqueduct, who gets the services of jockey Joe Rocco, Jr.