Watch: No harm as deer crashes opener at Finger Lakes 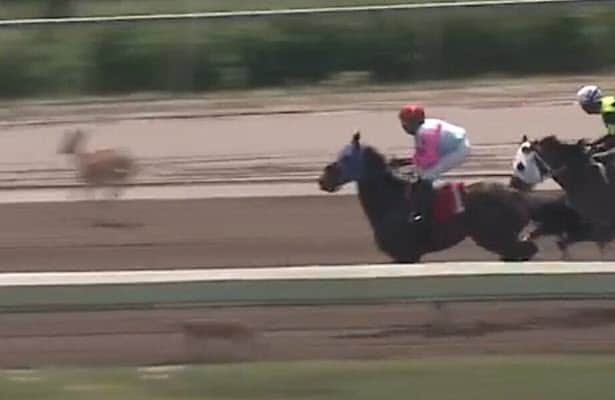 It was an eventful first race at Finger Lakes on Tuesday with wild animals crashing the course and a subsequent disqualification that was unrelated to the wandering critters.

A field of five New York-breds had reached the backstretch of the one mile and 70 yards allowance heat when what appeared to be a deer suddenly darted across the path of pacesetter Smooth Operation and jockey Luis Perez, forcing them to momentarily take up. Despite the trouble, Smooth Operation and Perez managed to maintain their advantage before tiring late and checking in fourth.

After the deer crossing, even-money favorite Daddy Knows overtook a weakening Smooth Operation on the second turn and had the lead in the stretch. But at about the eighth pole, Daddy Knows began to drift out under Andre Worrie. He impeded the path of second-choice Simply and continued to run erratically while crossing the wire a nose in front of long shot Run for Boston.

The jockey on third-place finisher Simply, Kevin Navarro, lodged a claim of foul against Daddy Knows for interference in the stretch. There was also a stewards’ inquiry into the incident with the result being Daddy Knows was disqualified and dropped to third behind Run for Boston and Simply.

The official chart for the race made no mention of the invading deer nor its impact on Smooth Operator.

According to New York rule 403.5, stewards can declare a race void and to order all wagers refunded "if they shall determine that any occurrence before or during the running of such race calls for such action by them."