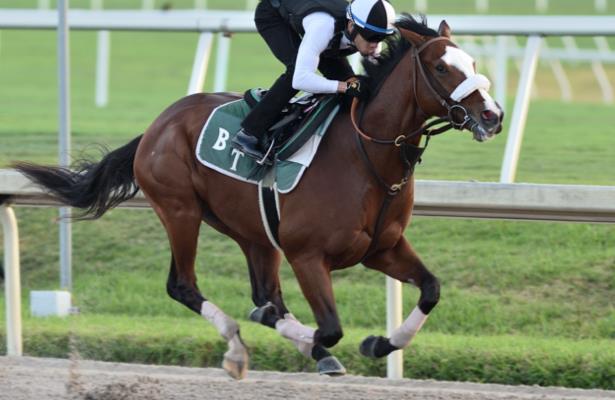 Sackatoga Stable's Tiz the Law, bred in New York by Twin Creeks Farm, breezed a half-mile Sunday on Big Sandy in his final preparation for the $1 million Belmont Stakes on Saturday at Belmont Park.

Trainer Barclay Tagg said he was pleased with the colt's final prep.

"He went well. We weren't looking for anything special today," said Tagg, who ponied Tiz the Law to and from the work.

Tiz the Law, who worked five-eighths in 1:00.53 on Monday on the Belmont main, was eager to work once released from the pony.

"When Barclay turned me loose, he got strong a little bit, but when we passed the seven-eighths to the three-quarters he settled down a little bit and he did it nice," said Franco. "He did it really well and really easy, so I'm very happy with the work."

A winner at first asking in August at Saratoga Race Course, Tiz the Law followed up with a four-length score in the Grade 1 Champagne in October at Belmont. He completed his juvenile campaign with a close third in the Grade 2 Kentucky Jockey Club, contested on a sloppy strip at Churchill Downs.

Tiz the Law prepared for his sophomore season at Palm Meadows Training Center in Boynton Beach, Florida, which began at Gulfstream Park with a convincing three-length score in the Grade 3 Holy Bull in February which garnered a career-best 100 Beyer Speed Figure. Last out, he romped the nine-furlong Grade 1 Florida Derby by 4 ¼-lengths on March 28.

Tiz the Law will travel the same distance on Saturday in the Belmont Stakes, which will be run at 1 1/8-miles around one turn as the opening leg of the Triple Crown for the first time in history.

Franco said Tiz the Law provides him with options to navigate the trip.

"He makes my work a lot easier," said Franco. "He's a versatile horse. He can be there on the pace or sit off, so I can do whatever I want.

"He's run here before and won and I think he likes the track," added Franco. "So, that's to our advantage."

Modernist, trained by Hall of Famer Bill Mott, is on the bubble.

Tagg said he would prefer to receive an outside post for Tiz the Law at Wednesday's post position draw.

The Grade 1 Kentucky Derby, rescheduled from May 2 to September 5, will go as the second leg of the Classic series, with the Preakness Stakes, originally slated for May 16, to close out the Triple Crown on October 3 at Pimlico Race Course.

Rounding out the Grade 1 entertainment on Belmont Stakes Day are the $300,000 Acorn for 3-year-old fillies going one mile; the $250,000 Woody Stephens, a seven-furlong sprint over Big Sandy for 3-year-olds; and the $250,000 Jaipur for 3-year-olds and up going six furlongs on turf, which offers a berth in the Breeders' Cup Turf Sprint.

A pair of one-mile turf races for sophomores, previously contested at nine furlongs, completes a stakes-laden card with the Grade 2, $150,000 Pennine Ridge and the Grade 3, $150,000 Wonder Again for fillies.