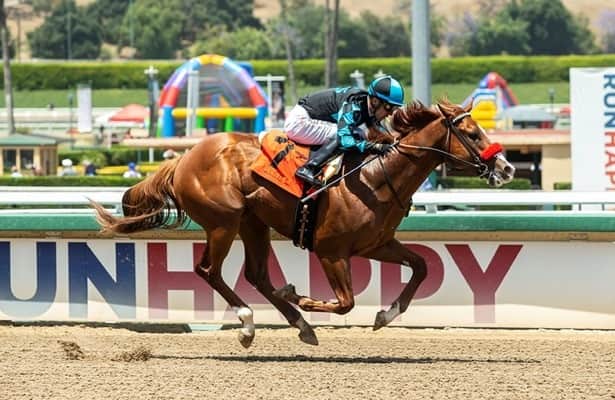 Justify, 2018 Triple Crown hero, was undefeated as a racehorse. Through one start, he is now unbeaten on domestic soil as a stallion.

Tahoma, the first of Justify’s foals to race in the U.S., won his debut Sunday at Santa Anita. He defeated fellow 2-year-olds in a 4 1/2-furlong sprint over the dirt, stopping the clock in 53.89 seconds under jockey Juan Hernandez.

Doug O’Neill trains Tahoma, who is out of the Rahy mare Madera Dancer. He was bred in Kentucky Hunter Valley Farm, Fergus Galvin and Golden Vale Farm, then purchased for $160,000 in September 2021 at Keeneland as a yearling by Dennis O’Neill.

The victory by Tahoma followed a fifth-place showing earlier Sunday at the Curragh in Ireland by Aspen Grove, who will carry the distinction as Justify's first starter.

Tahoma began breezing in March at San Luis Rey Training Center, and posted a bullet four-furlong work Monday at Santa Anita in 47 seconds. He headlined a field of eight Sunday in his debut, going off as a 4-5 favorite.

Fordy G for trainer Ryan Hanson went out to the lead of the short sprint, making the quarter-mile in 22.21 seconds. At that point, Tahoma was four-wide coming around the turn under Hernandez.

Turning for home, Tahoma put a nose in front. The West Coast Stables runner stayed well in control down the stretch, scoring by two lengths over runner-up Salta and returning $3.80 on a $2 win ticket.

“We had high expectations and we feel this colt has a lot of upside,” Leandro Mora, Doug O’Neill’s primary assistant, told Santa Anita's press office. “We train these babies pretty much like Brian Mayberry used to when I worked for him 30 years ago. We do not over-train a horse for these types of races. This colt has a lot of ability and I feel really confident about his future. We’re proud to win with the very first starter for Justify, very proud.

“Dennis bought this horse and he has the eye of an eagle. He provides us with so many nice horses. Doug is on his way back from Maryland, but he’s on his phone and he knows we won.”