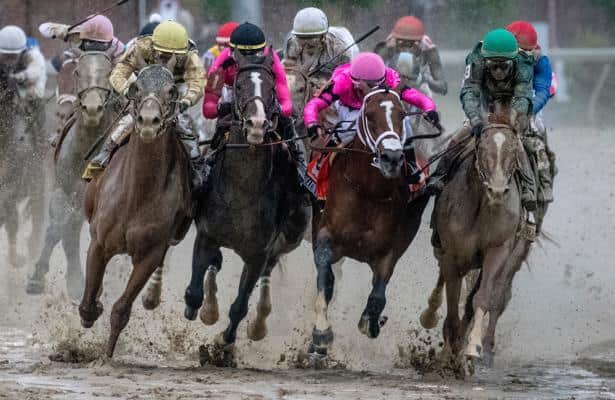 Owner and breeder Gary West said Monday was denied an appeal regarding Maximum Security’s Kentucky Derby placing from first to 17th by the Kentucky Horse Racing Commission, but a closer look at the race replay evidenced how he planned to make a case.

According to the race’s official chart, Maximum Security “veered out sharply” at the 5/16ths pole, forcing checks by War of Will and Long Range Toddy, whose jockey, Jon Court joined Country House rider Flavien Prat in lodging an objection.

But could the cause of Maximum Security’s sudden move provide reason to restore the original running order? A lawsuit looms as the next -- and likely final -- potential option for connections.

• Jockey Luis Saez, in the race’s immediate aftermath, blamed crowd noise. The pole sits within shouting distance of both a rowdy Derby infield and a packed grandstand.

• Retired Hall of Fame jockey Gary Stevens, now an analyst, suggested a photographer standing at the pole may have spooked Maximum Security off the rail with flash photography.

• Over a wet track, there’s always the excuse of weary legs, or a slip over a sloppy, sealed dirt surface.

It’s also worth a closer look at what unfolded a few strides before Maximum Security’s move out.

In the video below, played at 8% of original speed, notice a consistent line in the racing surface and Maximum Security’s position in relation to it. Behind him, War of Will (pink silks) and Long Range Toddy (black cap) nudge toward the rail as Maximum Security holds his path.

Just past the minute mark, Maximum Security hasn’t moved out, but War of Will is now positioned inside the line, nearly clipping heels with the leader. There were three strides in which they could have made contact, with War of Will’s left front appearing to land between Maximum Security’s rear legs on one of them.

After a third stride in close quarters, Maximum Security then veered.

Ben Glass, racing manager for West, who campaigns Maximum Security with his wife, Mary, said Monday that he’s unsure stewards had access to this angle when making a decision.

“We’re saying that because that rider (Tyler Gaffalione aboard War of Will) didn’t claim a foul, and we see the same thing that you see, that the other incidents are a moot issue for us, because it wasn’t us,” Glass added.

"That horse, War of Will, is on the rail and the next thing you know, he’s off the rail behind us. We’re looking at that very hard.”

Connections to Maximum Security offered to remain at Churchill Downs late Saturday to review the race and ruling. Stewards declined. Now, Glass said, he will represent the Wests on Thursday in a meeting with the Kentucky Horse Racing Commission to watch the film.

“We’re going to have quite a bit of people from our team there,” he said. “It’s going to be an interesting morning.”

West, who announced his intention to appeal in an interview Monday with NBC’s TODAY Show, will not be present Thursday.

“He doesn’t have enough gas left after this,” Glass said. “It’s pretty disheartening.”

West also said Monday that Maximum Security would not go on to the Preakness. Glass said that’s under the presumption that the colt was not named the Kentucky Derby winner, and that it would be up to trainer Jason Servis as to whether Maximum Security could wheel back in two weeks should the Derby results change.

In regard to the disqualification, Kentucky rules state that, “A jockey shall make his best effort to control and guide his mount in such a way as not to cause a foul. The stewards shall take cognizance of riding which results in a foul, irrespective of whether an objection is lodged.

"If in the opinion of the stewards a foul is committed as a result of a jockey not making his best effort to control and guide his mount to avoid a foul, whether intentionally or through carelessness or incompetence, the jockey may be penalized at the discretion of the stewards.”