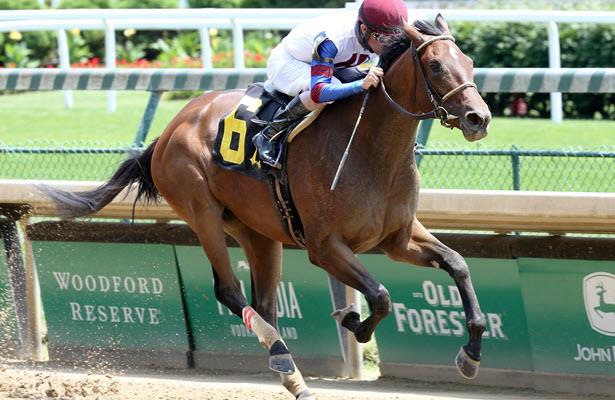 In this biweekly series, racing analyst Keeler Johnson will share promising horses from his handicapping watch list, reviewing runners who have recently caught his eye and previewing horses scheduled to run in the near future.

Trainer Ian Wilkes isn’t in the habit of cranking young runners to win on debut. Over the last 15 years, he’s gone just 26-for-636 (4%) with his first-time starters. When they do score on debut, it’s not uncommon for them to go on and enjoy productive careers — three-time graded stakes winner McCraken and recent Dogwood (G3) victor Four Graces come to mind.

So it’s noteworthy that Fabricate won her debut sprinting six furlongs on Friday at Churchill Downs. A 2-year-old daughter of sprinter/miler Speightster out of a mare by Scat Daddy, Fabricate settled a few lengths behind fractions of :21.89 and :45.16, then rallied smartly to the front and prevailed by half a length in 1:11.77. Judging from Wilkes’ record, Fabricate should only improve with experience, making her an intriguing prospect for summer stakes races at Saratoga or Ellis Park.

Another Wilkes trainee, Bahama Mischief squared off against Fabricate in Friday’s maiden test at Churchill and ran almost as well as the winner. Reserved seven lengths off the early pace, Bahama Mischief didn’t find her best stride until deep in the homestretch, gaining three lengths in the final furlong to fall half a length shy of catching her stablemate.

A daughter of leading sire Into Mischief out of an Empire Maker mare, Bahama Mischief is bred to handle at least a mile and figures to improve significantly with the benefit of experience and longer distances. The fact she came so close to winning on debut suggests Bahama Mischief has a bright future.

This French-bred filly probably should have won the 1 1/8-mile Regret (G3) over the Churchill Downs turf course on Saturday. Favored at 13-10 off a sharp allowance victory at Churchill, Crystal Cliffs saved ground throughout, but got bottled up in traffic on the far turn and had to wait for racing room at a critical moment. She tried to shift out at the top of the stretch, but found the way blocked and ultimately had to rally through tight quarters along the rail, sprinting the final furlong in :11.65 to miss by a head against the classy American Pharoah filly Harvey’s Lil Goil.

Under the circumstances, this was an eye-catching performance from Crystal Cliffs. A daughter of Group 1-winning miler Canford Cliffs, Crystal Cliffs can bounce back to the winner’s circle with a clean trip next time.

But My Sister Nat rallied resolutely under these challenging circumstances, rocketing home in approximately :45 flat to finish second in her first start of the year. Runner-up in the 1 3/8-mile Long Island (G3) at Aqueduct last November, this Chad Brown trainee seems destined to nab a long-distance turf stakes at some point this season. All she needs to excel is a more favorable pace setup.

Trained by Shug McGaughey, Creed finished second in his debut sprinting at Tampa Bay Downs, then took a big step forward when stretching out around 1 1/16 miles on June 11 at Belmont Park. The stoutly bred son of Honor Code earned matching 89 Beyer and Brisnet speed figures, solid figures that suggest he has the talent to develop into a stakes-caliber prospect.

Creed will attempt to keep his momentum when facing winners in Belmont’s sixth race on Thursday, a 1 1/16-mile allowance optional claiming event scheduled for 3:59 p.m. ET. He’ll square off against seven promising rivals, but if Creed improves at all off his maiden victory, the end result should be another trip to the winner’s circle.