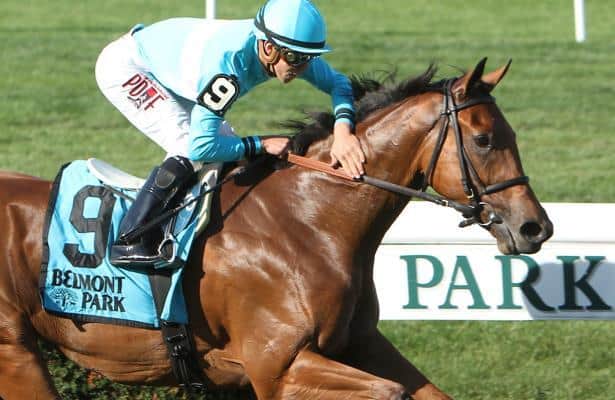 Five years after Lady Eli made her debut a winning one, the turf champion’s half-sister by American Pharoah matched the feat Saturday in winning Race 5 at Belmont Park.

Surprisingly overlooked a bit in the betting, 2-year-old Princesa Caroline struck at 9-2 as the fourth choice in a field of nine under jockey Javier Castellano, who said “she did it very easy.”

Princesa Caroline took a clear, outside trip up the back stretch, then ranged up on pace-setting favorite Laughable through the far turn. Those two were side by side into the stretch until Princesa Caroline edged away to hit the wire win 1:41.67 for a 1/16 miles.

“When I asked her, she took off,” Castellano added.

In the process, Princesa Caroline nudged over toward the rail a bit, forcing jockey Jose Ortiz and laughable to take up. Stewards examined the matter and deemed no changes.

The most perfect debut! Princesa Caroline, by American Pharoah and a half-sister to the great Lady Eli, wins first time-out under @jjcjockey for Chad Brown at @theNYRA… pic.twitter.com/E9qNQZl21W

Out of Sacre Coeur, the same mare who produced Lady Eli, Princesa Caroline is also trained by Chad Brown but campaigned by her breeders, who after selling Lady Eli for $160,000 as a yearling are hanging on to this filly. Runnymede Farm and Clay Catesby also have Three Chimneys Farm along as a partner.

Lady Eli, of course, went on to open her career 6-for-6 with victories in the Breeders’ Cup Juvenile Fillies and Belmont Oaks Invitational (G1). She then overcame a potentially deadly bout of laminitis to return as an older horse, winning multiple Grade 1 races on her way to a 2017 championship as top turf female.

Lady Eli, then in foal to War Front, sold for $4.2 million last November to John Sikura’s His Hill 'n' Dale Farm. She has since then delivered a colt.

Matt Shifman contributed to this report.

Daughter of American Pharoah, half to Lady Eli, Princesa Caroline clears the inquiry and wins her debut for trainer Chad Brown with @jjcjockey up in the 5th at #BelmontPark

Hugo Rodriguez was the groom for Lady Eli and now for her half-sister... pic.twitter.com/ULjodeqaUX