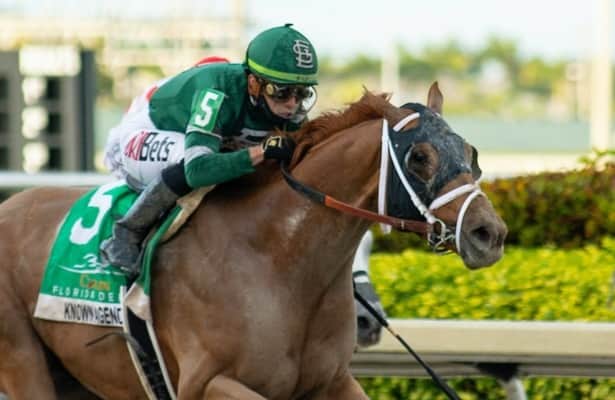 Florida Derby (G1) winner Known Agenda and Jeff Ruby Steaks (G3) runner-up Sainthood went through five furlongs together in 1:00.4. The time marked the ninth-fastest of 36 works Friday over that distance under the Twin Spires.

“Because of the spacing of their last two races, I wanted a more serious work out of them,” Pletcher said. “I thought both horses got over the surface well and that’s what was most important about getting them up here early to work over it."

Jockey Irad Ortiz Jr. will pilot the St. Elias Stable homebred Known Agenda on May 1. A jockey has not yet been confirmed for Sainthood, who will make only his fourth career start in the Derby.

Wood Memorial (G2) hero Bourbonic and second-place finisher Dynamic One also took to the Churchill track Friday morning for Pletcher. That duo was timed at 48.6 seconds for four furlongs, 12th-fastest of 39 works at the distance.

“I thought it would be good to work both of these horses together after coming out of the same race,” Pletcher said. “I’d say we were definitely surprised at winning the Wood. (Bourbonic) has always trained a little bit light but we always thought that the further the distance, the better it would be for him. He likes to drop back and make one run.”

Jockey Kendrick Carmouche, who booted home Bourbonic to a 72-1 upset of the Wood Memorial, gets the return call for the Kentucky Derby. Jose Ortiz will ride Dynamic One, an Aqueduct maiden winner who made his stakes debut in the Wood Memorial.

Pletcher has saddled a record 55 Kentucky Derby starters and seeks his third win after scoring in 2010 with Super Saver and Always Dreaming in 2017. Carmouche and the Ortiz brothers are also aiming for their first Derby victories.

Also working Friday morning at Churchill Downs was Tampa Bay Derby (G2) hero Helium for trainer Mark Casse. The colt with a 3-for-3 lifetime record breezed five furlongs from the gate in 1:01.8, 28th-fastest of 36 works at the distance. Julien Leparoux was up for the drill.

"The most important thing about the work is Julien was happy," Casse said.

The Hall of Famer Casse owns one win each in the Preakness Stakes and Belmont Stakes but seeks his first triumph in the Triple Crown’s opening leg. Jockey Julien Leparoux, who gets the call on Helium, has never finished in the money in 12 prior Derby starts.