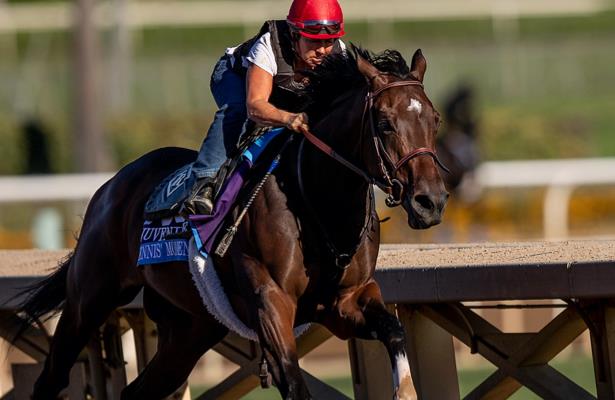 The Dale Romans-trained Dennis’ Moment was timed by the Daily Racing Form’s clocker in 48.02 seconds after covering four furlongs under Tammy Fox.

”I thought it went perfect. It was just what we were looking for from his last work,” Romans said. “I told Tammy, ‘Just break him off at the half-mile pole and just sit on him and don’t do a thing.’ He got 47-and-a-couple, galloped out strong and looked good to me.”

Here's look at Dennis' Moment working this morning @GulfstreamPark in preparation for the Fountain of Youth Stakes next Saturday. He went 4F in 48.02 underneath exerciser rider Tammy Fox for @RomansRacing.

Flavien Prat is scheduled to ride the son of Tiznow for the first time in the Fountain of Youth with Irad Ortiz Jr. committed to travel for the Saudi Cup card next weekend.

Dennis’ Moment hasn’t run since finishing off the board in the Breeders’ Cup Juvenile on Nov. 1 at Santa Anita Park, where he lost all chance while stumbling badly and going to his knees following the start.

The Kentucky-bred colt, who was purchased for $400,000 at the 2018 Fasig-Tipton Saratoga Select Yearling Sale, was also the recipient of bad luck in his debut at Churchill Downs in June when he lost his rider after clipping heels shortly after the start.

He broke his maiden in spectacular fashion in his second career start July 27 at Ellis Park, scoring a 19 ¼-length triumph after running seven furlongs in 1:21.95. The Kentucky-bred colt came right back to win the Sept. 14 Iroquois (G3) at Churchill Downs by 1 ¾ lengths in his first start around two turns.

Dennis' Moment put in a work this morning in preparation for next Saturday's Fountain of Youth Stakes @GulfstreamPark. @Gabby_Gaudet_ had a chance to speak with @romanracing following the work on how he felt it went, take a listen! pic.twitter.com/ozWXt8eAs7