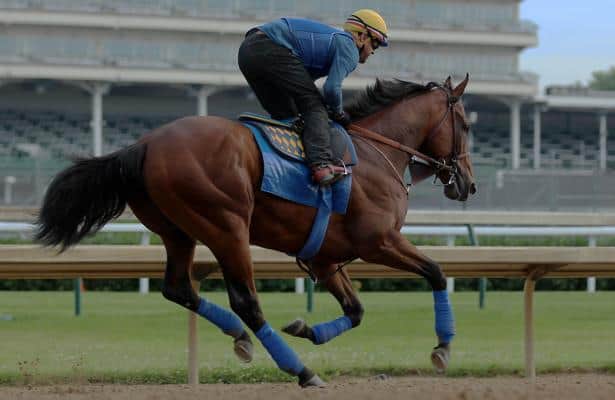 Monarch of Egypt did one better than his dad on Saturday, making his debut a winning one as the first horse by 2015 Triple Crown winner American Pharoah to race.

Under jockey Ryan Moore, and in the silks of Breeders' Cup-winning owner Peter Brant, the favored colt took the opener at Ireland's Naas Racecourse with ease.

Going five furlongs, the Aidan O'Brien trainee, who was purchased by Brant and Coolmore, which stands American Pharoah at stud, showed immediate pace and had no problem holding on late.

“That’s what we’ll be thinking, obviously," O'Brien told Racing TV, "but we’ll have to run before then for experience.”

Monarch Of Egypt under Ryan Moore ensures American Pharoah begins his career as a sire with a winner! pic.twitter.com/HXYTWljUwy

American Pharoah lost just twice in his 11-race career, including on debut going 6 1/2 furlongs. Next out, he won the Del Mar Futurity (G1) at seven furlongs to begin a streak of victories leading to the first Triple Crown sweep in decades.

Monarch of Egypt is out of the Group 2-winning mare, Up, a daughter of Galileo. Small sample size, of course, but Saturday's result offered some proof of the long-believed opinion that American Pharoah will throw runners who can excel over any surface.

American Pharoah could have more 2-year-old progeny at the races Wednesday with the Wesley Ward-trained duo of Tesorina and Lady Delaware — half-sister to Breeders’ Cup Juvenile Turf winner Hootenanny — entered for the opener at Aqueduct.

O'Brien is looking forward to running more of his American Pharoah foals as well.

“The ones we have, we’re lovely — very good mind. Very good movers," he told Racing TV. "We’re be excited about what we see at the moment.”

Here's Monarch Of Egypt, a son of US Triple Crown winner American Pharoah, making an impressive winning debut at Naas