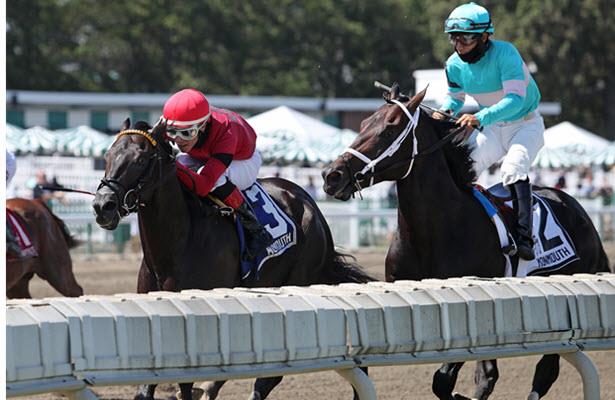 After a steward’s inquiry and jockey’s objection concerning "intimidation" in the stretch, Warrior’s Charge was moved up to first to earn the win in the Grade 3, $200,000 Philip H. Iselin Stakes at Monmouth Park.

Pirate’s Punch -- the 9-2 third-choice in a four-horse field -- broke fast from the gate under Jorge Vargas Jr. and commenced to trade the lead back and forth with Warrior’s Charge for most of the race. Down the stretch, Warrior’s Charge and Paco Lopez attempted to make a move on the inside of Pirate's Punch, but was unable to get through, which stewards' ruled merited the disqualification of Pirate's Punch.

Pirates’s Punch was officially moved to second place, taking away what would have been the gelding’s first career stakes victory.

The 4-year-old Warrior’s Charge, a son of Munnings out of Battling Brook, by Broken Vow, is owned by Ten Strike Racing and Madaket Stables LLC. The Philip H. Iselin was his first race since finishing fourth in the Metropolitan (G1) at Belmont Park on July 4.

Warrior’s Charge returned $3.00 for the win. Winner of the Razorback (G3) at Oaklawn Park in February, he ups his record to 11: 5-1-3 with earnings of $835,310. After the race, Cox said he might be pointed towards one more race before taking on the Breeders’ Cup Dirt Mile.