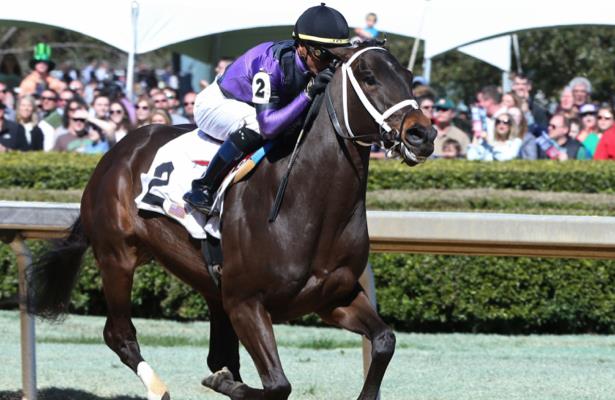 The connections of Warrior's Charge are weighing two options for the 4-year-old's next start: the Grade 2, $500,000 Stephen Foster at Churchill Downs on June 15 or the Grade 1, $500,000, Met Mile at Belmont newly scheduled for July 4.

Clay Sanders, partner in Ten Strike Racing, which campaigns the colt with Sol Kumin's Madaket Stables, said Thursday that those are "the only logical spots from here, with a lack of tracks open and a lack of secondary stakes races."

Warrior's Charge, trained by Brad Cox, exits a second-place finish in a deep renewal of the May 2 Oaklawn Handicap (G2) won by By My Standards, who is also pointing to the Foster. Before that, the son of Munnings won the Razorback Handicap (G3) in February – his first stakes start since coming in fourth in the Preakness Stakes last May.

The Stephen Foster and the Met Mile both have their pros and cons, Sanders said.

Warrior's Charge has continued training at Churchill Downs, so "probably the easier one from the logistics and better timing would be the Stephen Foster," Sanders said. "And it’s two turns – we think he’s potentially better at two turns. The negatives there are it’s a Grade 2, and we’re really trying to get a Grade 1 to cement him as a stallion. We’d like to get a Grade 1 win under his belt. So even winning that doesn’t accomplish that.

"Whereas the Met Mile is definitely a stallion-making race, and even if it wasn’t, it’s a Grade 1. It would really help selling him out to stud," Sanders continued. "The cons on the Met Mile – we don’t think one mile’s a problem, but the one turn versus two turns, he’s never won at one turn. He hasn’t had a lot of chances since early in his career. But we do think he prefers running the turns.

"The question is, he seems to be better on the front. Can he make the lead in a one-turn race, and if he can’t, can he sit off a horse and finish? We hope he can, but it hasn’t been proven yet. So those are kind of the thoughts I have."

Warrior's Charge has won four of nine career starts but remains somewhat of an unknown commodity. He showed early speed in last year's Preakness and stuck around for fourth, but then missed the rest of the summer and fall due to a bout of colic.

Sanders said he and Cox are pleased with the progress made by Warrior's Charge as an older horse.

"From a speed in the mornings standpoint, he wasn't lighting up the workout tab as a 3-year-old," he said. "He always worked well, but he wasn't one that was going to post bullets et cetera. But he's certainly been more aggressive as a 4-year-old and definitely working faster.

"At the same time, we're trying to get him to relax so if we have some opportunities where he needs to rate, where he doesn't make the lead, we'd like to see if he can do that."