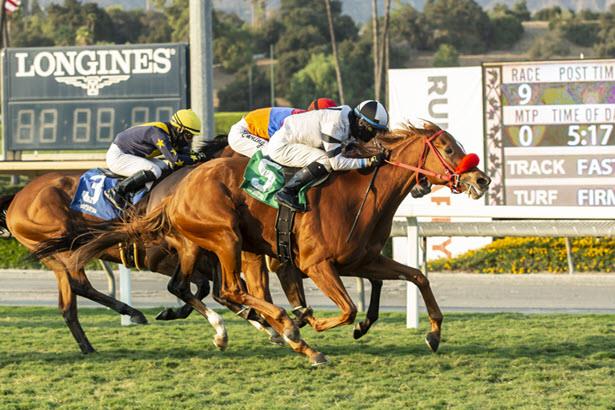 In what amounted to a storybook ending, Benjamin and Sally Warren’s homebred Warren’s Showtime pinned her ears late and would not be denied en route to a gutty neck victory in Saturday’s Grade 3, $100,000 Autumn Miss Stakes at Santa Anita.  Ridden by Flavien Prat, the 3-year-old chestnut daughter of Clubhouse Ride provided trainer Craig Lewis with his 1,000th career win while getting a flat mile on turf in 1:33.77.

Breaking sharply from her number five post position, Warren’s Showtime was immediately taken off the pace while a joint fourth, about six lengths off of pace setting Quiet Secretary mid-way around the Club House turn.

Fifth by a similar margin three furlongs out, Warren’s Showtime wheeled four-wide at the top of the stretch and in a resolute effort, overhauled Going to Vegas close home to notch her first graded stakes win while providing Lewis with his career milestone.

“Fillies like her (bring me back).  There are a lot of bumps in the road," Lewis continued. "A trainer’s life is not all pie and ice cream, but when things like this happen it makes it all worthwhile.  The early mornings, the things that go wrong.  The difficult situations, but situations like this overcome all the negative involved.”

Most recently a close third at a mile and one eighth on turf in the Grade 1 Del Mar Oaks Aug. 22, Warren’s Showtime, who is out of the Warrens’ Grade 1 stakes winner Warren’s Veneda, was the solid 3-5 favorite in a field of seven sophomore fillies and paid $3.40, $2.60 and $2.20.

“I’ve been on her in the morning and I was pretty pleased with the way she was going,” said Prat, who had never ridden Warren’s Showtime in the afternoon.  “She’s always running in great races. She definitely deserved a graded stakes (win). She definitely gives you everything.  I thought it was a pretty strong pace up front, so I was taking my time and when I asked her to go she responded well.”

Attentive to the pace throughout, longshot Going to Vegas ran too good to lose under Mario Gutierrez, as she finished a half length in front of her stablemate Nasty.  Trained by Richard Baltas, Going to Vegas was off at 14-1 and paid $8.40 and $3.80.

Second throughout, Nasty got on terms with Quiet Secretary at the quarter pole and made the lead inside the eighth pole, but was third-best on the day.  Off at 7-1 with Ricky Gonzalez up, she paid $4.20 to show.