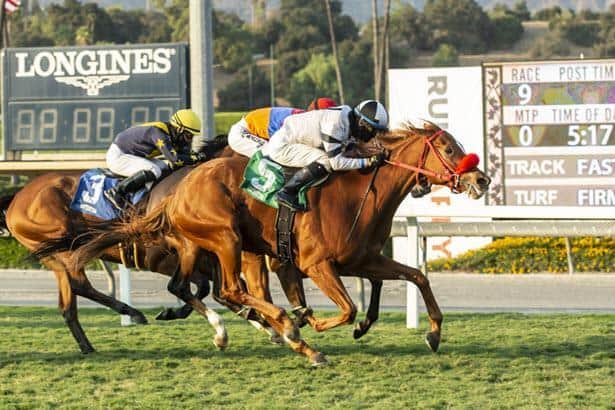 In a race laden with early speed, the Craig Lewis-trained Warren’s Showtime rates a huge chance to get up in time going a flat mile on turf in Sunday’s Grade 3, $100,000 Wilshire Stakes at Santa Anita. For fillies and mares 3 and up, the Wilshire has attracted a solid field of eight distaffers, the majority of whom appear to be in top form.

Among the speed contingent, Phil D’Amato’s Leggs Galore will try to once again pose an elusive target on the lead, while John Sadler’s comebacking Stella’s Star is a dedicated deep closer who will get the services of leading rider Flavien Prat.

Owned and bred in California by Ben and Sally Warren, Warren’s Showtime is winless in five starts at the current meet, dating back to a close third going a mile on turf in the opening day Lady of Shamrock on Dec. 26. Favored in three out of her five outs, Warren’s Showtime ran one of her best races in finishing second, beaten three quarters of a length by Leggs Galore as the 3-5 favorite in the one mile turf Fran’s Valentine Stakes on May 9.

With an abundance of speed signed up for the Wilshire, Warren’s Showtime could get the assist she needs to turn the tables on Leggs Galore and notch her second graded stakes win. By Clubhouse Ride out of the Grade 1 stakes-winning Affirmative mare Warren’s Veneda, Warren’s Showtime has been a gem of consistency, posting an overall mark of 19: 6-2-9, with earnings of $637,431.

A winner of five consecutive turf sprints prior to tasting defeat at 6-5 in the one-mile turf Mizdirection Stakes two starts back on April 17, Leggs Galore bounced back with a tremendous effort in the Fran’s Valentine as she held a two length advantage virtually throughout en route to posting a career-best 96 Beyer Speed figure as she held Warren’s Showtime safe by three quarters of a length.

A 4-year-old California-bred filly by Bayern that is owned by her breeder, William Sims, Leggs Galore no doubt will be intent upon replicating her Fran’s Valentine score under regular rider Ricky Gonzalez. A three-time stakes winner, Leggs Galore, who is out of the Indian Charlie mare Cashing Tickets, has six wins from nine starts and will be facing graded stakes competition for the first time.

Idle since May of 2020, Irish-bred Stela Star closed much ground to be second, beaten a half length by Warren’s Showtime in her U.S. debut, in the one-mile turf China Doll Stakes, two starts back on March 7, 2020. Subsequently off as the 9-5 favorite in the Honeymoon Stakes (G3) May 30, 2019, Stela Star was 14 lengths off the lead after the first half mile and flew to be second, beaten a neck by multiple stakes winner Laura’s Light.

Owned by Hronis Racing Inc., Stela Star, a 4-year-old filly, was a Group 3 winner in Ireland and likely has a huge future in front of her. With Prat engaged, she might be able to overcome the layoff and improve upon her overall mark of 6:2-2-0.