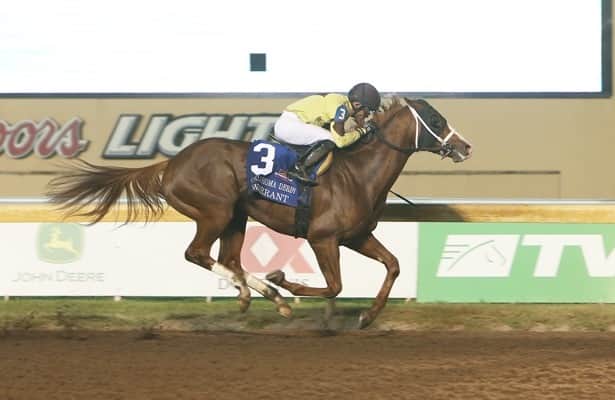 The second leading trainer in the country, Brad Cox, won his third Oklahoma Derby (G3) in a row at Remington Park on Sunday with Warrant, tying Oklahoma Horse Racing Hall of Famer Donnie Von Hemel with most derby wins here.

No one has ever won three in a row in this race. Cox’s win in this year’s edition of the $400,000 Oklahoma Derby followed victories in 2020 with Shared Sense and in 2019 with Owendale. Cox’s three derby wins were with three different jockeys. Joel Rosario was the winner aboard Warrant on Sunday. Richard Eramia won last year for Cox and Florent Geroux the year before.

Von Hemel’s trips to the winner’s circle came with Going Ballistic in 2007, Queen’s Gray Bee in 1991 and Clever Trevor in the first edition in 1989.

Warrant, a 3-year-old son of Constitution, out of the First Samurai mare Whisper Number, was cruising under Rosario after 3/4 of a mile in second during the 1 1/8-mile race. He was the 3-1 third choice in the betting and trailed only front-running 20-1 longshot Flash of Mischief in the stretch. They fought to the wire before Warrant finally prevailed by 1 3/4 lengths.

The 2-1 wagering favorite, Super Stock, who had won the Arkansas Derby (G1) in April at Oaklawn Park and the Ellis Park Derby in August, broke in the air at the beginning of the race. He managed to finish third, 2 1/4 lengths behind the winner after weaving in and out of traffic in the lane.

“It was a perfect trip,” Rosario said of Warrant’s race. “The more I asked him, the more he gave me.

Warrant won the Texas Derby at Lone Star Park on May 31 and then was laid off until Aug. 7 when he raced in the West Virginia Derby (G3). Mr. Wireless got the best of Warrant that day but couldn’t get a sniff Sunday, finishing fifth a little more than 8 1/2 lengths behind.

Warrant is owned by Twin Creeks Racing Stables (Randall Gullatt) of Versailles, Ky. The connections’ only true concern for their horse was his racing under the lights.

“It didn’t seem to bother him, though,” said Rosario. “When we dove to the inside, he settled in and seemed very happy.”

This was the first Oklahoma Derby win for Rosario and for owners Twin Creeks Racing.

There were several indications that Lady Mystify was going to bounce back to win the $200,000 Remington Park Oaks (G3) after a loss by 17 lengths in her previous race.

Consider these factors for the 6-1 outside shot in the seven-horse field of 3-year-old fillies:

1. There’s an old saying in horse racing. “I’m not shipping to shine shoes,” and it was obvious trainer Peter Eurton meant business with Lady Mystify. While other national outfits like Steve Asmussen and Brad Cox sent multiple horses to Remington Park’s multitude of stakes races on Sunday, Eurton sent only one. This one – Lady Mystify.

2. Jockey Flavien Prat flew in from the West Coast also with only one mount on the stakes-laden card. This one – Lady Mystify.

3. And if you’re wondering why she should win after losing by 17 lengths in the Torrey Pines Stakes (G3) at Del Mar, there was a perfectly good excuse for that. In her three races prior to that stakes, Lady Mystify had won two of three, including a maiden special weight race at Santa Anita Park by 18 lengths. If you delve closely into her past performances for the Torrey Pines, you might notice that she was taken off the diuretic Lasix, presumably to prep for the Breeders’ Cup, where the pharmaceutical is not allowed, and it affected her performance. Her two wins were with Lasix, a legal anti-bleeder medication, and she would be back on it for the Remington Park Oaks.

4. She also also be getting Prat back in the saddle, the jock who rode her to the two victories. Florent Geroux was aboard for her poor trip, off Lasix.

All these factors kicked in for the Remington Park Oaks and, sure enough, Eurton had not shipped one horse to shine shoes. She broke well from the gate in the 1 1/16-mile race and sat just back of the two early speed fillies, My Girl Red and Lovely Ride. Those two set all the pace for her as she sat in the garden seat with Prat chilly. When the time was right, Prat asked her to run and she went to the lead after 6 furlongs. She cruised to a three-length victory at generous 6-1 odds. She paid $14 to win, $5 to place, and $2.80 to show across the board.

This daughter of Bernardini, out of the Unbridled’s Song mare J. Quirk, earned $120,000 for owners Ex-Line Border Racing (Ryan Exline), SAF Racing and Richard Hausman of Pasa Robles, Calif., and improved her record to six starts, three wins, one second and one third for $217,520 in her bankroll. It was the first stakes victory of her young career.

“She broke really well for me,” said Prat, “and we had a good trip. I gave her a little breather on the backstretch and that’s why she gave me so much in the stretch. She was very calm before the race, so I felt good.”

Lady Mystify covered the distance in 1:44.13 over the fast main track after chasing fractions of :23.60 after a quarter-mile, :47.29 for the half-mile, 1:11.80 for three-quarters of a mile and 1:37.40 for the mile. She was bred in Kentucky by Scott and Evan Dilworth. She finished ahead of 8-5 second favorite Pauline’s Pearl, who was a head in front of third-place finisher Amendment Nineteen, the post-time even-money favorite.

The Oaks win was the second for Eurton, who shipped Grade 1 winner Champagne Room to win the race in 2017. The rest of the connections of Lady Mystify enjoyed their first Remington Park Oaks victory.