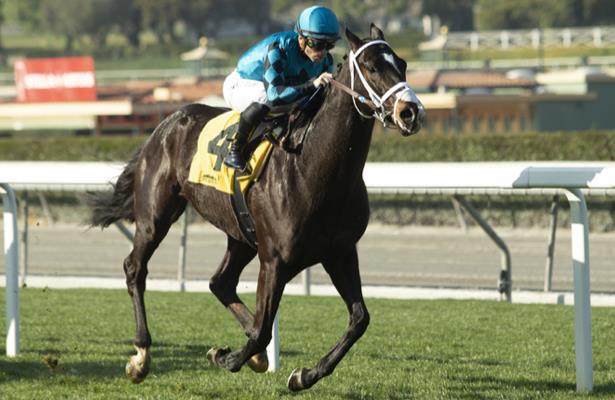 Making his first start Friday since filling out the Breeders' Cup Juvenile Turf exacta at odds of 55-1, Billy Batts proved the performance was no fluke when rolling to an easy victory at Santa Anita Park.

An invitee to the rich Feb. 29 Saudi Cup race card, Billy Batts stalked the pace set by Peter Miller stablemate Bulletproof One and pounced in the stretch, winning the $75,000 Baffle Stakes with relative ease.

"This is such a good horse," said jockey Umberto Rispoli, a former Hong Kong rider who made the Baffle his first stakes win in California. "He put himself in the right spot. I was cruising just around the corner waiting for the straight, and once I brought him outside, he just knew what he had to do.

"...He was playing a lot when I took the lead, but I had so much engine under myself."

This was a final step toward a possible switch to dirt in the $800,000 Saudi Derby at King Abdulaziz Racecourse in Riyadh. Billy Batts appeared this week as one of two Americans invited -- the multiple stakes winner Rowdy Yates being the other -- and six in all so far as the prospective field takes shape.

“I thought my other (horse) had a better chance at five and a half," Miller said of Bulletproof One, "but they pressed her pretty hard the whole way and it took its toll. Billy is a good horse and we needed to get a prep into him to get him ready and it worked out. He’s trained very well on the dirt. I like the distance a flat mile and I think he should run well.”

Connections went to $200,000 to acquire Billy Batts as a 2-year-old, and he paid them back in the Breeders' Cup, briefly taking the lead in the lane back on Nov. 1 before Structor swept by for a 3/4-length victory, also at Santa Anita.

Billy Batts, who broke his maiden last year at fourth asking, entered the championships off a pair of minor stakes placings in California.

The filly Bulletproof One was away as Friday's Baffle Stakes favorite but faded late after opening up with fractions of 20.99 seconds and 45.38. Billy Batts scored at 2-1 with Rager and Rookie Mistake filling out the board.