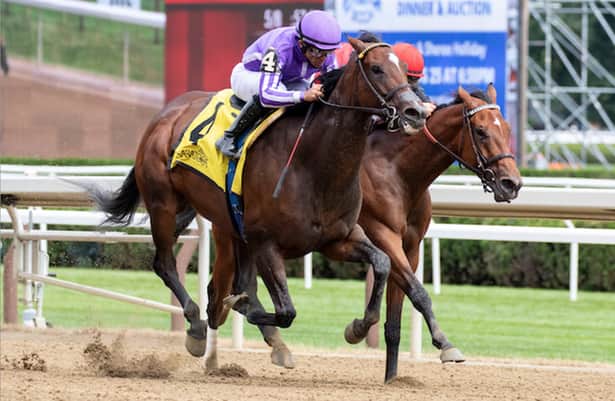 Trainer Wesley Ward is calling an audible with multiple graded-stakes winner Kimari and will ship the 5-year-old Munnings mare back to New York for the Grade 2, $250,000 Gallant Bloom on Sunday at the Belmont at the Big A fall meet.

Initially targeting the $350,000 Thoroughbred Club of America (G2) on Oct. 8 at Keeneland, Ward regrouped for the 6 1/2-furlong Gallant Bloom in favor of more time between starts ahead of the $1 million Breeders’ Cup Filly and Mare Sprint on Nov. 5.

“I would have preferred to run her there. It’s where the Breeders’ Cup is at, but more so because it’s her home track,” Ward said. “The timing just wasn’t right with 28 days between races, and the obvious goal would be the Breeders’ Cup. So, I told the connections that I would like to be able to give her more time, and I do like the 6 1/2 (furlong) distance.”

A dual-surface stakes winner, Kimari captured Saratoga’s Bolton Landing on turf during her juvenile season en route to another turf score in the Indian Summer at Keeneland. Last April, she captured the Madison (G1) at Keeneland and did not race again until finishing eighth behind stablemate Golden Pal in the Breeders’ Cup Turf Sprint in November at Keeneland.

Ward sung praises on behalf of Joel Rosario, who piloted Kimari to four of her eight lifetime wins, including the Honorable Miss and Madison.

“That’s who she seems to run the best for, and he rides her the best of anyone,” Ward said. “He gives her a little break the first part of the race and eases her out with that big stride and lets the race come to him.”

Kimari’s earnings are just shy of the million-dollar mark at $981,327 through a 15: 8-2-2 record. Bred in Kentucky by China Horse Club, Kimari was bought by Coolmore’s M.V. Magnier for $2.7 million out of last year’s Fasig-Tipton November sale and was kept in training for a prosperous 5-year-old season.

She is out of the Cozzene mare Cozze Up Lady, whose Constitution yearling colt was purchased for $1.3 million at the 2022 Keeneland September yearling sale.