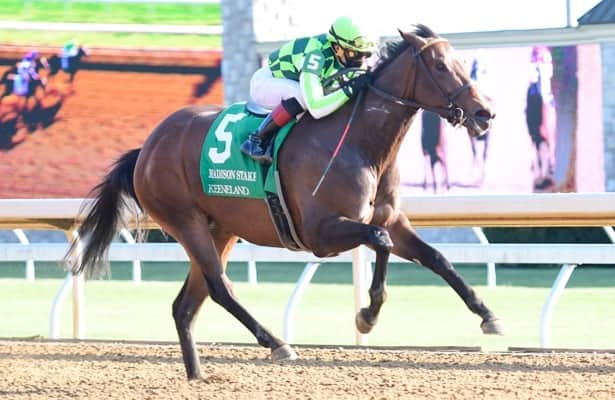 Wesley Ward’s six Breeders’ Cup horses include five who were certainly expected to be going to Del Mar – and a turf sprinter who was a question mark because she has been on the bench most of the year.

Kimari has not raced since April 3, when the Madison Stakes (G1) at Keeneland was the stage for her first graded-stakes victory. Ward said Thursday the 4-year-old filly will be pre-entered Monday for the five-furlong, $1 million Breeders’ Cup Turf Sprint on Nov. 6.

“We kind of gave her a little break after her win,” Ward told Horse Racing Nation in a telephone conversation that may be heard Friday on the Vegas Stats & Information Network racing podcast. “We were kind of getting ready for Saratoga. We got there. We had a beautiful breeze on the grass, and she came back just not quite right.”

After that July 16 workout, Ward took Kimari out of training for two months. The Munnings filly who was bought as a $152,000 yearling by Dave Mowat got back to morning breezes last month. She has had five timed works since, four of them on the turf at Keeneland.

“Every week, every work is better than the (last) here on the grass course,” Ward said at Keeneland. “She’s very, very sound, so we’re going to give it a try.”

Ward said the bloodstock agent who picked out Kimari in July 2018 literally has been in step with his decision to bring the five-time stakes winner back from a seven-month break to enter such a big race without so much as a confidence-building prep.

“Ben McElroy stands next to me at nearly every work,” Ward said. “Dave Mowat is very, very excited to get back to the Breeders’ Cup.”

Mowat and Ward campaigned Sunset Glow to her second-place finish to Lady Eli in the 2014 Breeders’ Cup Juvenile Fillies Turf at Santa Anita. They face a tall order trying to go one better, especially against a Turf Sprint field that includes two stablemates who command a lot of respect, not to mention betting dollars.

Futures favorite Golden Pal (8-5), an Uncle Mo colt who won the 2020 Breeders’ Cup Juvenile Turf Sprint, scored in this month’s Woodford (G2) at Keeneland after his dud of a seventh-place finish in August at the International Stakes (G1) in England.

“I hold him in such high regard,” Ward said. “It was a bit of a low, going over there, because I was very confident going into the race. He’s just a tremendous athlete. It’s still kind of a head scratcher as to what went wrong that day, but that happens in horse racing.”

Arrest Me Red, a 3-year-old Pioneerof the Nile colt who had not yet been listed in the Bovada futures book, stormed home an impressive winner Oct. 2 in the Belmont Turf Sprint (G3) to merit his place in the Breeders’ Cup.

“That was great,” Ward said. “He ran a 100 Beyer and did it in really, really good fashion. I’m expecting a big effort.”

Add Kimari, who is the 7-1 second choice in the Turf Sprint futures, and Ward thinks he has three horses who will display different tactics in the one-turn dash.

“Golden Pal is probably the quickest early,” he said. “Arrest Me Red stalked at Saratoga, so that shouldn’t be an issue. The way it’s been going with Kimari, she always gets away a step slow. I don’t think any of the three will compromise their styles early on in the running.”

Ward also plans to have three fillies – futures favorite Averly Jane (11-4), Twilight Gleaming (9-2) and Kaufymaker (14-1) – racing in his bid for a three-peat in the five-furlong, $1 million Breeders’ Cup Juvenile Turf Sprint on Nov. 5.

Averly Jane, by Midshipman, won Oct. 10 with a stakes-record time in the Indian Summer Stakes at Keeneland. Twilight Gleaming, an Irish-bred by National Defense, won a minor stakes in France 2 1/2 months ago in her last start.

“That Twilight Gleaming, she’s really something,” Ward said. “She’s going to be fresh. With sprinters, especially 2-year-olds, I like to give them good spacing. She’s got really good spacing, so it’s tough for me to separate those top two.”

Kaufymaker, by Jimmy Creed, finished a distant second to Averly Jane in the Indian Summer.

Tyler Gaffalione will keep the ride on Averly Jane at Del Mar, according to Ward, who penciled in John Velázquez to stay on Golden Pal. The other assignments were still unfilled.

Ward said all six horses will be flown the evening of Nov. 1 on a FedEx flight from Indianapolis to San Diego. He said he expected to arrive at Del Mar no later than Nov. 2.