Trainer Wesley Ward will saddle promising 2-year-old Fauci in a five-furlong maiden sprint on the main track set as Wednesday's third race on the Opening Day of the 25-day spring/summer meet, to be contested without spectators, at Belmont Park.

Dr. Fauci, one of the world's leading experts on infectious diseases, has played a prominent role on the White House Coronavirus Task Force throughout the COVID-19 pandemic. The 79-year-old Fauci is a native of Brooklyn, N.Y.

Owned by Lindy Farms and Ice Wine Stable (Dave Reid and Frank Antonacci), it was Phillip Antonacci, Frank's son, who selected both the horse and the name for the promising colt.

"Phillip Antonacci purchased the horse at Keeneland," Ward said. "Being of Italian-American descent, and for all the great work that Dr. Fauci's done, they wanted to find a horse, especially in this time, that they could give a high-profile name to and this is the one."

Ward said Fauci has shown speed and ability on both the turf at Palm Meadows and the Keeneland dirt, where he is currently training lights out over the main track.

"He's training unbelievable," Ward said. "He's a bigger colt. He doesn't have a typical speed horse look to him. It looks like he'll go a little further. He has a long stride and is just an athlete. He goes just as fast as you want him to.

"He worked phenomenal on the grass early on down at Palm Meadows. He's equally good, if not a shade better, on the grass. That said, all of his works on the dirt at Keeneland have been eye-openers."

Fauci will emerge from Post 3 under Tyler Gaffalione in a field of six. 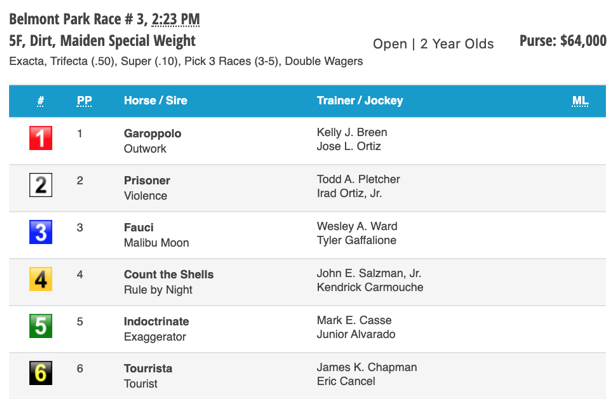