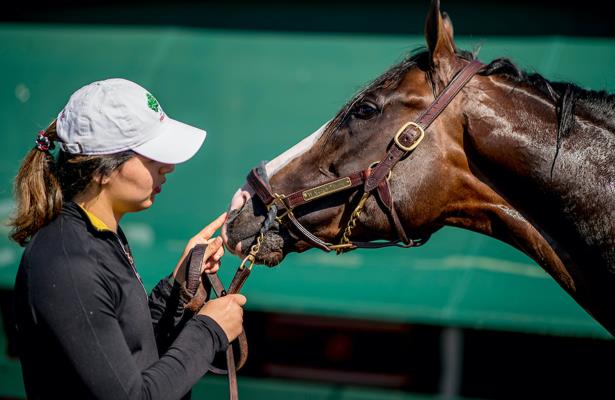 Gary Barber’s War of Will, a winner of last year’s Preakness Stakes and idle since beaten in the 2019 Breeders’ Cup Classic, is back at Santa Anita Park to square off with sharp veteran turf miler River Boyne, top French-bred miler Raging Bull and others as they head an outstanding field of 11 3-year-olds and up in Monday’s Grade 1, $300,000 Shoemaker Mile.

The Shoe Mile, named for the legendary Hall of Fame jockey, is a Breeders’ Cup Challenge race, which grants its winner an automatic berth and fees paid into the TVG Breeders’ Cup Mile on Nov. 7 at Keeneland. Also featured on Monday's card are the Gamely (G1) and Monrovia (G2), both on turf as well.

Headquartered with soon-to-be Hall of Famer Mark Casse at Palm Meadows Training Center in South Florida, War of Will ships west and will be trying turf for the first time since late in his 2-year-old campaign, while Red Baron’s Barn, LLC and Rancho Temescal’s Irish-bred River Boyne, a recent winner of Santa Anita’s Grade 1 Frank E. Kilroe Mile, seeks his third consecutive win over the course for trainer Jeff Mullins.

Most recently a troubled third in the Grade 1 Woodbine Mile on Sept. 14, French-bred Raging Bull ships west from Palm Meadows for Chad Brown and will get the services of Joel Rosario. A bona fide deep closer, Raging Bull should be on the move late.

A much troubled eighth, beaten 4 ½ lengths in last year’s Kentucky Derby, War of Will took the Preakness Stakes five starts back on and was subsequently well beaten in the Belmont Stakes.  Winless in four starts since his Preakness victory, the 4-year-old colt by War Front made his first four career starts on turf, his most recent a close fifth-place finish in the Breeders’ Cup Juvenile Turf as a maiden on Nov. 2, 2018. Winless in four tries on turf and 14: 4-1-2 overall, War of Will arrived at Santa Anita on Tuesday and Casse has been bullish about his return to turf at one mile.  Ridden in his last 10 starts by Tyler Gaffalione, he’ll be ridden for the first time by leading man Flavien Prat, who won six races here this past Sunday. Casse will also be represented by Florida-bred longshot March to the Arch, who comes off a third place finish as the 7-2 favorite in a Grade 3 one mile turf stakes March 28 at Gulfstream Park.

A phenom at age 3, this 5-year-old Irish-bred was winless in seven starts last season but has enjoyed a resurgence this year when paired with an aggressive Abel Cedillo, who pointed him to a 2 ½-length score two starts back in the Grade 3, one-mile turf Thunder Road Stakes on Feb. 8 at 9-2 and a neck victory at 4-1 in the Kilroe Mile on March 7. A winner of eight out of his 13 starts over the Santa Anita turf, River Boyne, who is 24: 9-5-4 with earnings of $1,211,918, has never been better as he bids for his sixth graded turf stakes win on Monday.

Last seen in Southern California winning the Grade 1 Hollywood Derby on Dec. 1, 2018 at Del Mar, Raging Bull is winless in five subsequent top-level assignments but was only beaten 1 ¼ lengths in the Woodbine Mile after getting bothered badly at the break. All five of his wins (from 12 starts) have come in combination with Rosario and it would appear all systems are “go” off a lengthy freshening with three-time Eclipse Award winner Brown, who will also send out English-bred Without Parole, who was well beaten as the 3-1 favorite in the Grade 1 Pegasus World Cup Turf Invitational Jan. 25 at Gulfstream.

THE GRADE I SHOEMAKER MILE WITH JOCKEYS & WEIGHTS

9. March to the Arch—Victor Espinoza—124