War of Will to be race week arrival for Belmont Stakes 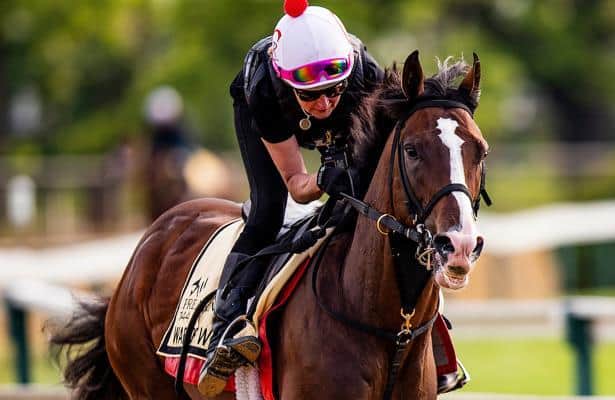 Canadian Hall of Fame trainer Mark Casse said Gary Barber's War of Will, who was a powerful winner of the Preakness Stakes, is in good order in Kentucky, where he is currently preparing for the Belmont Stakes.

"He trained this morning and it went well," Casse said Saturday. "He's been through a lot the past couple weeks, so right now we're just trying to gather up energy and get him feeling good."

Casse said War of Will is likely to arrive in New York on Monday, June 3, ahead of the Belmont, which is slated for Saturday, June 8.

"The plan is for him to breeze on Friday [May 31] or Saturday [June 1] the week prior to the Belmont at Keeneland," Casse said. "If all goes as planned, he'll get on a van Sunday night or Monday afternoon to New York to arrive for the week of the Belmont.

"We've had pretty good luck doing it that way, not only with him, but with others. I talked it over with Gary Barber and David Carroll [assistant trainer] and that's the way we're going to do it."

Tracy Farmer's homebred Sir Winston, a chestnut son of Awesome Again, is Casse's other Belmont contender. He worked five furlongs in company with fellow Farmer-owned Catch a Thrill on Saturday morning over the Belmont main track.

With Joel Rosario up, Sir Winston tracked the stakes-placed Catch a Thrill before finishing strong to stop the clock in 1:01.48 just in front of Catch a Thrill in 1:02.31.

"I was very happy with Sir Winston this morning," said Casse. "He's never been much of a work horse, but since he's started running better recently he's become a better workhorse. I would call that an A+ work for him this morning - it might be a 'B' for most horses, but for him it's an 'A+'."

Assistant trainer Jamie Begg, who saddled Sir Winston at Casse's New York base, said that the improving colt came out of the work in good order.

"He came out of it well. We wanted to give him a good finishing work. We're not looking for track record speed in any regard, it's just the fact that he comes home and builds some confidence," Begg said.

Sir Winston earned a career-best 100 Beyer Speed Figure last out when rallying for second behind Global Campaign in the Grade 3 Peter Pan.

"More importantly, he ran the last quarter of a mile, after going a mile and an eighth, in 23 and 2," said Casse.

Begg said that Sir Winston is training in the morning in a style that matches his afternoon efforts.

"We work him the way he likes to run," said Begg. "Let him fall away from the pole and then run when you need to run and he gets a lot more out of the gallop out. He seems to have responded to that in his works."

Casse also noted that Grade 3-winner Got Stormy breezed well Saturday morning at Churchill Downs, covering five furlongs on the main track in 1:01.40. The 4-year-old Get Stormy chestnut is targeting the Grade 1, $700,000 Longines Just a Game, a one-turn mile on the Belmont turf.

"She breezed well this morning and she'll be traveling with 'WOW'," said Casse, in reference to War of Will. "I think it suits her perfectly - the distance, the one-turn. It's a good spot for her. It's a tough spot, but she's doing extremely well right now. We're excited about her."

Casse also noted that he expects to saddle both Perfect Alibi and Reiterate in the $150,000 Astoria, a 5 ½-furlong dirt sprint for juvenile fillies set for June 6 to kick off the Belmont Stakes Racing Festival. The graded stakes placed Dream Maker is pointed to the $150,000 Easy Goer, a 1 1/16-mile test for sophomores on Belmont Stakes Day.