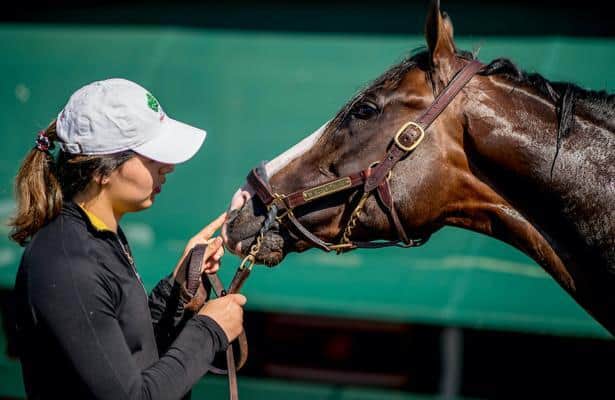 Trainer Mark Casse has said in recent months that this season, he plans to campaign 2019 Preakness Stakes winner War of Will on turf. A return destination revealed itself in the last week.

In a conversation with Horse Racing Nation contributor Mary Dixon Reynolds, Casse said he’s pointing War of Will toward the newly established $75,000 Sunshine Forever Stakes on May 9 at Gulfstream Park.

Many barns that normally would relocate to Kentucky and New York this time of year are still in south Florida beyond Gulfstream’s Championship Meet as continued fallout from the coronavirus pandemic. Accordingly, Gulfstream added an April 25 main track event for 3-year-olds, the Unbridled, as well as the Sunshine Forever at 1 1/16 miles on turf, to give horsemen a chance to spot stakes-quality horses.

War of Will “is training super,” said Casse, who’s “looking forward to getting him started.”

A 4-year-old son of War Front, the Gary Barber-owned runner has tuned up for his season debut recently with a trio of turf works at the Palm Meadows Training Center. On Sunday, he breezed five furlongs in a snappy 57.65 seconds.

The colt emerged early last year when going back to back in Fair Grounds’ Lecomte Stakes (G3) and Risen Star (G2) before a mild physical issue left him off the board in the Louisiana Derby (G2). War of Will was prominent in Maximum Security’s interference and subsequent disqualification in the Kentucky Derby when placed seventh.

War of Will's second half of the season wasn’t as productive. He managed just one placing, a third in the Pennsylvania Derby (G1), and finished ninth when last seen in the Breeders’ Cup Classic — hence Casse's plan for 2020.

War of Will has shown “an affinity for turf,” the trainer said. “Plus, it would help in his stallion prospects.”

Going back to his 2-year-old season, War of Will made four starts over the lawn, jumping right from a third in a maiden debut at Saratoga to a trio of stakes starts, including a second in Woodbine’s Summer Stakes (G1) and fifth in the Breeders’ Cup Juvenile Turf.

War of Will then made his first main track start on Nov. 24, 2018, at Churchill Downs. He delivered his first career victory, dashing away by five lengths with a score that put him on course to win a spring classic.