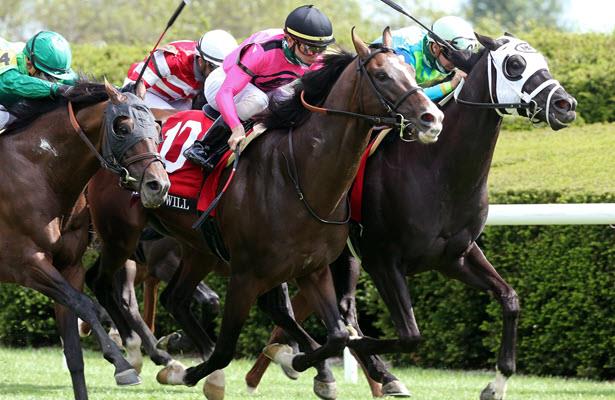 War of Will became a dual-surface Grade 1 winner as he surpassed longshot Parlor at the very last stride of the Maker’s Mile at Keeneland for trainer Mark Casse.

Ridden by Tyler Gaffalione, the one-mile turf race was decided by a photo finish with the 2019 Preakness Stakes winner by War Front being victorious by a nose.

Going off at odds of 24-1 Parlor, ridden by Florent Geroux took the lead from pacesetter and fellow longshot High Crime deep in the homestretch, but did not have enough to hold off the late-charging War of Will, who went to post just north of 5-1.

The first quarter time of :23.17 and half-mile time of :46.91 were registered by High Crime, who was pressed by Parlor throughout the race.

WAR OF WILL is BACK!

Add the @MakersMark Mile (GI) to the list of stakes victories for War of Will for @markecasse with @Tyler_Gaff up at @keenelandracing pic.twitter.com/8B7PRpnR4u

War of Will started his career on the turf, and just missed a Grade 1 score on the grass in his second start, finishing second to Fog of War in the Summer Stakes for 2-year-olds at Woodbine in September of 2018.

After finishing eighth in the 2019 Kentucky Derby and already a multiple graded stakes winner following wins in the Grade 3 Lecomte and Grade 2 Risen Star at Fair Grounds, the Gary Barber-owned colt won a Classic in the Grade 1 Preakness.

On Friday, making his second start of the year and second consecutive on the turf, Casse decided to take the blinkers off War of Will in the Maker’s Mark.

“Getting the last race out of the way, getting that start into him to get the nerves out and taking off the blinkers today helped him,” Gaffalione said following the race. “He relaxed beautifully going around there and when I called on him he really finished up nicely.”

Gaffalione told Keeneland’s Scott Hazelton that he believes War of Will is just as good on both surfaces.