War of Will, Starship Jubilee lead field of eight in Woodbine Mile 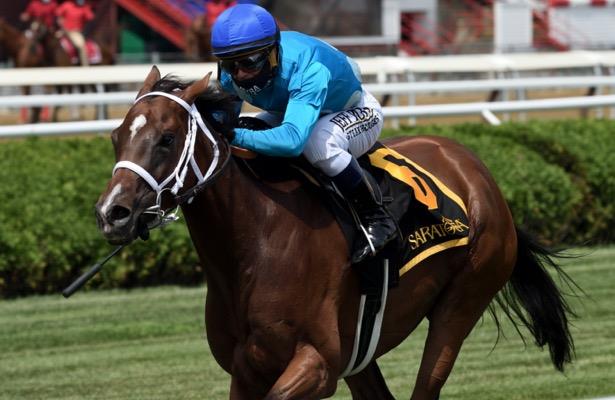 Starship Jubilee, Canada’s reigning Horse of the Year, will take on a gifted group of seven rivals, including 2-1 morning line favorite War of Will and undefeated 3-year-old Shirl’s Speight, in Saturday’s Grade 1 Woodbine Mile.

The 24th running of the Woodbine Mile, worth $1 million and contested over the E.P. Taylor Turf Course, has attracted a competitive field of eight hopefuls. With an estimated post time of 5:39 p.m. ET, the race will be showcased on a live broadcast on TSN3 & TSN5 in Canada and on NBCSN in the U.S. from 5-6 p.m. ET.

Under the terms of the Breeders’ Cup ‘Win and You’re In’ Challenge Series, the Woodbine Mile winner will be entitled to a fees-paid berth for the $2 million Breeders’ Cup Mile, to be run on Nov. 7 at Keeneland.

This year’s edition of the Mile showcases an intriguing mix of local talents and U.S. headliners.

Starship Jubilee, Canada’s 2019 Horse of the Year, will make her 38th career start in the fall turf classic for owner Blue Heaven Farm and trainer Kevin Attard. The bay was claimed for $16,000 on Attard’s behalf by his father and fellow trainer, Tino Attard, at Gulfstream in early 2017.

“I don’t think people realize how hard it is to keep a horse consistent,” said Attard. “When you see that consistency — there are always so many things that can go wrong, bad trips, bad luck, horses waking up on race day and not feeling well — bringing their A-game each and every time, it shows you how special it is and how special this horse is.”

In five starts this year, Starship Jubilee, bred in Florida by William Sorren, won her first four starts before finishing fourth in her most recent engagement, the Diana (G1) at Saratoga on Aug. 23.

Attard is hoping a return to the E.P. Taylor course — where she has won six races, including back-to-back (2018-19) Canadian Stakes (G2) — results in a trip to the winner’s circle.

“You can see that she seems like she enjoys winning. She has that desire and she has that feisty attitude in the morning. I think, especially with fillies, that attitude carries over to the afternoon.”

Now, her connections are hoping to add more hardware to an already impressive haul.

“She’s a multiple Sovereign Award winner, which is pretty special in itself. But to train a Horse of the Year, that’s icing on the cake, a huge accomplishment. To look back at the season that she had, winning the E.P. Taylor Stakes, an international race like that, it was a fabulous season, and she’s a fabulous mare. They are once-in-a-lifetime horses.”

Attard has enjoyed having a front-row seat to watch her compete.

“When I look at her, she’s tiny — definitely not big. She’s fierce, she’s feisty and she just has this mental approach and attitude. … She goes out there and wants to do everything hard and fast. She loves what she does. She’s a true competitor — loves to train, loves to run and enjoys what she does. And we enjoy watching it all.”

Should she win, Starship Jubilee would join Ventura (2009) and Tepin (2016) as the only mares to take the Mile.

Leading jockey Justin Stein picks up the mount on the mare, who is approaching the $2 million mark in career earnings.

A Keeneland sale graduate, War of Will is a four-year-old Kentucky-bred son of War Front out of the Sadler’s Wells mare Visions of Clarity.

The Maker's Mark was the fourth graded stakes victory for War of Will and his first on turf.

Last year, War of Will took the Lecomte Stakes (G3) and Risen Star Stakes (G2) at Fair Grounds before his Preakness victory in mid-May. The Preakness came after a troubled seventh-place finish in the 2019 Kentucky Derby.

He launched his career with a pair of races at the Toronto oval, including a third in his debut on Aug. 24, 2018.

Now, after two years, the well-travelled bay is back at the place where it all began.

Casse, who won the 2016 Mile with Tepin and the 2017 running with World Approval, is hopeful the third time is the charm for the five-time winner.

“He’s coming off that nice win in the Maker’s Mark Mile and he’s trained as good as I’ve ever seen him train since that race. We’re expecting him to run well. Rafael [Hernandez] is going to ride him. We had got the call for Rafael for the Mile two or three weeks before March the Arch ran. So, it doesn’t have anything to do with him picking one over the other. He had committed to Gary Barber and War of Will before he even rode March the Arch. I don’t want anybody to read anything into it — that they think one is better than the other. It has no bearing.”

Lightly raced Shirl’s Speight, denied a spot in the Kentucky Derby starting gate after developing a cough ahead of the race, will be making his third start in the Mile.

After a brilliant debut on July 4, an eight-length score at seven furlongs on the E.P. Taylor Turf Course, Charles Fipke’s homebred three-year-old son of Speightstown followed it up with a 2 3/4-length triumph in the main track Marine Stakes (G3) at Woodbine on July 25.

"He missed a work but I kept him galloping and galloping,” said Attfield. “He had a very good work [Tuesday] morning."

Shirl’s Speight also was being considered for the Preakness Stakes on Oct. 3 before the connections decided to keep their budding star at home.

"This [Mile] is still a big step, but it's better than the alternative,” said Attfield. “There was the dirt, the ship, I couldn't send help with him."

Trained by Barb Minshall, the gelding was a half-length back of Silent Poet in the Connaught Cup (G2) on July 11, before taking the runner-up spot to Mile rival March to the Arch in the King Edward (G2) on Aug. 15.

Owned by Hoolie Racing Stable and Bruce Lunsford, Admiralty Pier, 5-3-2 from 21 starts, was seventh to El Tormenta in last year’s running of the race.

Armistice Day, also from the Minshall barn, will be making his third straight start at Woodbine.

Owned by Bruce Lunsford and Lansdon Robbins, the 4-year-old son of Declaration of War has a 3-2-1 record from five outings at the Toronto oval, including a one-length score in last July’s Toronto Cup Stakes.

The chestnut gelding’s most recent win came on Aug. 2 at Woodbine, a 1 1/4-length triumph in a 1 1/16-mile main track race that originally was scheduled for the grass.

Under Rafael Hernandez, the 5-year-old gelded son of Arch notched a 2 1/4-length win in the Grade 2 stakes event, the seventh win in 23 starts for the Florida-bred bay.

“I was extremely impressed with his last win,” said Casse. “More importantly, he’s come back and trained very well. Patrick [Husbands] is going to ride him. We’ve had tremendous success with Patrick over the years, and he’s also had great success for Live Oak. It was a perfect match.”

A 4-year-old son of Gio Ponti, the Gary Barber-owned gelding has a record of 3-3-2 from 12 career starts.

“He’s a horse that’s just become better and better,” praised Casse. “We just feel like the mile will suit him well, but he still has to prove he fits in the caliber of March the Arch and War of the Will. He’s doing well.”

Daisuke Fukumoto, who teamed to win the Queen’s Plate with Mighty Heart on Sept. 12, gets the call.

Value Proposition, a 4-year-old son of Dansili, will try the Canadian green scene for the first time.

Trained by Chad Brown for Klaravich Racing Stables, the dark bay heads into the Mile off a third-place showing in the Poker (G3) on July 4 at Belmont.