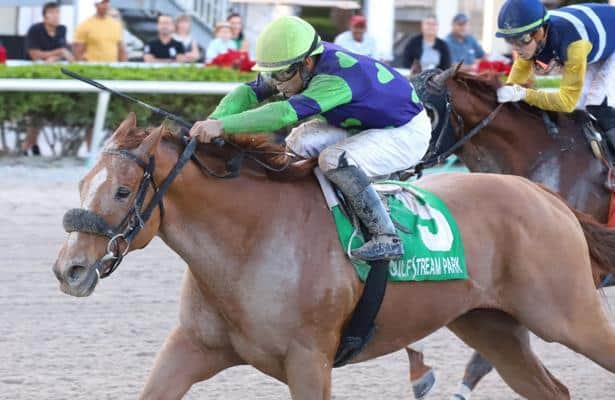 It's been an odd year for War Story, the 8-year-old gelded son of Northern Afleet.

Since his sophomore season, he's raced at least six times a year. But this year, he won't have his second race until the $600,000 Charles Town Classic (G2) on Aug. 28.

The coronavirus shutdowns gave trainer Elizabeth Dobles, who took over training duties from Jorge Navarro in October, a chance to give him a break.

War Story, owned by Imaginary Stables and Glenn Ellis, started the year with a third-place finish in the Pegasus World Cup Invitational (G1) won by Mucho Gusto. Then he shipped to Dubai for the $12 million Dubai World Cup in March, but the race was canceled because of the pandemic.

"Because of the whole coronavirus and the traveling to Dubai, it took a lot out of him to travel all the way out there, travel back," Dobles said Wednesday. "And then he was in quarantine, and we kept him in training here for a while, but it was pretty much pointless to keep training him when we had no races, really, to go into."

Dobles noted the postponed Charles Town Classic became War Story's target as soon as the late August date was set. This year will be his fourth attempt in the Charles Town Classic, which normally is run in April. He finished third in 2017, second in 2018 and third last year.

"He’s got his quirks, but apart from that he’s pretty forward training," Dobles added. "He’s old enough to know what he’s doing out there and when to do it. So we don’t ask much out of him. We just try to keep him happy."