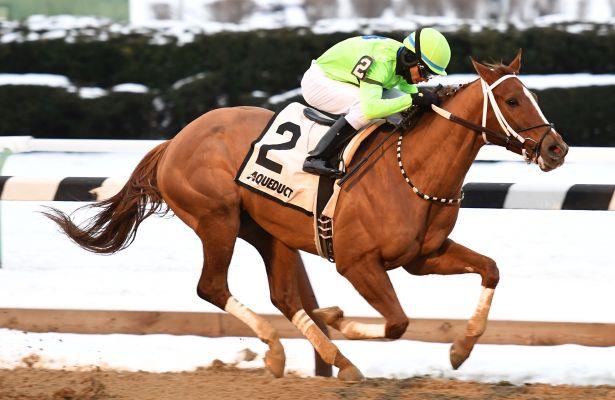 Making his first start since a fourth-place finish in the Grade 1 Cigar Mile Handicap, War Story put forth a valiant effort going wire-to-wire to best a field of six capturing the 111th running of the $1250,00 Queens County on Saturday at Aqueduct Racetrack.

Breaking alertly from post position 2 with Tony Gallardo aboard, War Story went to the front with Discreet Lover and 6-5 post time favorite Bay of Plenty in close pursuit. War Story set comfortable fractions of 24 seconds flat for the opening quarter-mile with the half going in 48.75.

At the quarter-pole, War Story was set down and extended away in the stretch to secure the victory by 7 ¾-lengths.

"There wasn't a lot of speed [in the race]," said Gallardo. "He was ready. I tried to be aggressive and go to the lead. Nobody really came from behind."

"This is a really good horse," said winning trainer Mario Serey, Jr. "I trusted him. In his last couple of starts he's had a little bad luck in his races and it was a bit of a tough spot but we were confident coming in knowing his ability and Anthony did a great job today."

Earlier in the card in Race 3, August Dawn Farm's Bavaro continued an impressive start to his career in going gate-to-wire to capture the New York Stallion Series $150,000 Great White Way for state-bred 2-year-olds on the inner dirt track.

Named after former New York Giants tight end Mark Bavaro, the Gary Sciacca trainee improved to 2-for-2 to start his career, winning his stakes debut by 3 ¾ lengths in completing six furlongs in 1:11.16.

Bavaro paced the field of six in going a quarter-mile in 23.14 seconds and a half in 46.59. Jockey Manny Franco piloted Bavaro to the inside and fended off post-time favorite Gold for the King's charge at the five-sixteenths mark before pulling away in the stretch.

"I knew he had good speed from the first time he raced.," Franco said. "He didn't break good in his first race like today but he showed good positional speed. Today, he got out of the gate well and took off. He really did it easy and when I asked for more at the quarter pole, he just took off."

"He's a tough horse, that's why he's named Bavaro," Sciacca said. "He's a big, good-looking runner where nothing bothers him. He's like a bull. He's a nice horse and he's done everything right. I figured he'd be up front, but I didn't think it'd come that easy. He changed leads today, he didn't change it last time. The speed wasn't that great today. "We'll probably keep him at short [distances]."

Gold for the King, who won the Notebook last out, finished second and is 3-1-2 in six career starts for trainer Charlton Baker.