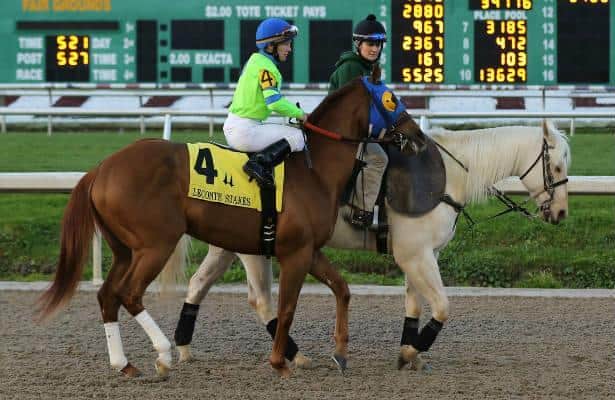 War Story will make his first start under new trainer Jeffrey Radosevich when he comes to the Jersey Shore to take on Triple Crown winner American Pharoah in the 48th running of the $1 million William Hill Haskell Invitational on Aug. 2.

“The horse has been doing well,” said Radosevich, who conditions the horse for Loooch Racing Stable Inc. “I’ll probably ship him a day or two before the race. We are only about six or seven hours away, but will also look at the weather to see how hot it will be. We may ship in a couple days prior depending on that.”

War Story is coming off a fourth place finish in the Ohio Derby at Thistledown, where he is currently stabled, after a slow beginning that left him second to last going into the first turn. Prior to that start, the 3-year-old gelding by Northern Afleet out of the Pulpit mare Belle Watling was a multiple graded stakes place runner in the Grade 2 Risen Star and the Grade 3 Lecomte, both at Fair Grounds. Those finishes led him into the starting gate of this year’s Kentucky Derby.

“I’ll probably work him about 10 or 12 days out from the race,” said Radosevich. “He will most likely go five furlongs.”

War Story has worked once since his Ohio Derby start, where he went four furlongs over a “muddy” Thistledown main track in :51 1/5 on July 13.

“There appears to be so much speed that is going to be in the race,” said Radosevich. “We are going to have to sit off the early pace and hope for one good run.”

Along with War Story and American Pharoah, other probable entries for the race include Mr. Jordan, trained by Monmouth based Eddie Plesa Jr., either Stanford or Competitive Edge out of Todd Pletcher’s barn, and Anthony Dutrow conditioned Tekton. Other possible entrants include Keen Ice, Bent on Bourbon and Good Pick Nick.

Jockey Colby Hernandez will be aboard War Story for the Haskell.

The William Hill Haskell will be televised live on NBC from 5-6 p.m. and is part of the Breeders’ Cup “Win and You’re In” Series, with the victor getting an automatic berth to the $5 million Breeders’ Cup Classic at Keeneland on Oct. 31.

Gates will open earlier than originally scheduled at 9 a.m. on that day with first post at 11:30 a.m.

Bustin Out tries her luck in stakes company for the first time as she looks for her third win in a row in Sunday’s, $70,000 Miss Woodford Stakes going six furlongs over the Monmouth Park main track.

“She has been doing great since last time out,” said Chuck Spina, who trains the horse for Gayle Ioia. “She came out of last race excellent. I usually like to wait a month or so in between starts, but she is ready to go in 14 days.”

Bustin Out has dominated in her last two races going gate to wire in both winning by a combined 10 ¼ lengths. In her four career starts, all over the Monmouth Park dirt, Bustin Out has yet to miss the board with a record of 2-1-1.

The 3-year-old filly hasn’t worked since her last start on July 5. Her latest breeze came on June 26, where she went four furlongs on the Monmouth Park main track in :54.

“This is going to be a tough field,” said Spina. “There is a lot early speed in the race. She doesn’t have to go to the lead. This is the second time in a row that she has drawn the rail, but we have seen that she can handle it. She is a fighter. This will be a true test of how good she really is.”

Bustin Out, by Bustin Stones out of the Disco Rico mare Disco Shaker, faces two stakes winners in the field of 11;Coco’s Wildcat and Get the Sensation. She also faces another familiar foe in Todd Pletcher’s Thepartyneverends, who beat Bustin Out to break her maiden earlier in the meet.