War Like Goddess takes on males in Grade 1 Joe Hirsch 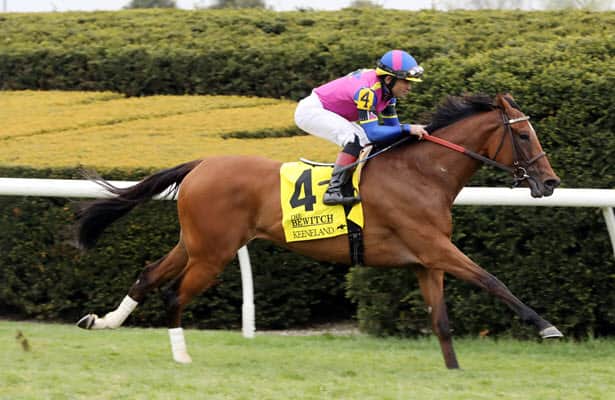 For the past two seasons, George Krikorian’s War Like Goddess has displayed superiority amongst her staying female counterparts at graded stakes level on grass. In Saturday’s Grade 1, $500,000 Joe Hirsch Turf Classic, the talented bay mare will target a new task when facing males for the first time for Hall of Famer Bill Mott.

Click here for Belmont at Aqueduct entries and results

War Like Goddess enjoyed a sensational 4-year-old campaign last year, including triumphs in the Grade 3 Bewitch at Keeneland, as well as Saratoga Race Course’s Grade 2 Glens Falls and Grade 1 Flower Bowl Invitational. She capped her year with a troubled third in the Grade 1 Filly and Mare Turf at Del Mar, beaten only a half-length by the victorious Loves Only You.

A return winner of this year’s Bewitch and Glens Falls, War Like Goddess enters Saturday’s engagement from a troubled second in the Flower Bowl, where she chased a slow pace and came under urging in upper stretch once in the clear but came up a neck shy of victory to Virginia Joy.

A perfect 4-for-4 at 12 furlongs, her long-distance capabilities has made an ambitious spot like the Joe Hirsch a viable option, according to Mott.

“It’s been an option we’ve had if the race seemed suitable for her. The distance and everything here is suitable,” said Mott, who saddled eventual turf champions Theatrical [1987] and Channel Maker [2018, 2020], as well as Shakespeare [2005] to Joe Hirsch scores. “She seems to be doing very well and I’m pleased with her.”

Mott said he is hopeful that War Like Goddess will not be hindered by slow fractions up front.

Trainer Christophe Clement will saddle a pair of runners, including Gufo, who finished third in last year’s Joe Hirsch.

Gufo boasts the most accomplished resume in the Joe Hirsch field with field-best earnings of $2,169,030 and three Grade 1 victories. He captured the Grade 1 Belmont Derby Invitational in October 2020 during his 3-year-old season when ridden by returning rider Junior Alvarado.

“He’s been training well,” Clement said. “The horse looks good. He ran a great race last time at Kentucky Downs and was unfortunate to be beaten only a nose. It’s rewarding to be working with horses like him that can be competitive this long. Junior will ride him. He won a Grade 1 on him as a 3-year-old and he worked the horse [a half-mile in 49.42 seconds over the Belmont inner turf] on Friday.”

Soldier Rising will attempt to keep a highly consistent record afloat following a late-closing third in the Sword Dancer.

Arriving to Clement’s barn last summer by way of France, the 4-year-old Frankel gelding has won twice at allowance optional claiming level this summer, travelling 1 3/8 miles over yielding Belmont inner turf in June before finishing a game second to Channel Maker in the Grand Couturier. He cut back to 1 3/16 miles for his following optional-claiming start on July 31 at Saratoga, which he won by a head over graded stakes placed Street Ready.

Soldier Rising was kept in Saratoga following the conclusion of the meet, where he has consistently breezed over the Oklahoma turf course.

“I kept him in Saratoga to train on the turf over there and he’s doing very well,” Clement said. “He ran a good third last time. He can stay a mile and a half, and he seems to be able to handle any type of ground.”

Manny Franco will pick up the mount from post 6.

Trainer Chad Brown will look for a repeat triumph in the Joe Hirsch with last year’s winner Rockemperor [post 5, Javier Castellano] as well as Grade 1 United Nations winner Adhamo [post 3, Dylan Davis], who enter from a respective ninth and eighth in the Sword Dancer Invitational.

Adhamo, a 4-year-old son of Intello owned by Madaket Stables, Michael Dubb, Michael J. Caruso and Louis Lazzinnaro, was a Group 3 winner in France before joining Brown’s barn this year.

A late-closing second in the Grade 3 Fair Grounds in February in his stateside debut, Adhamo earned Grade 1 placings when a respective third and second in the Old Forester Turf Classic at Churchill Downs and the Resorts World Casino Manhattan at Belmont Park. He broke through with a 1 1/2-length victory in the United Nations on July 23 at Monmouth Park.

Brown said neither of his horses appreciated the good going last out in the Sword Dancer.

“The turf just didn’t suit them unfortunately, so I drew a line through it,” Brown said.