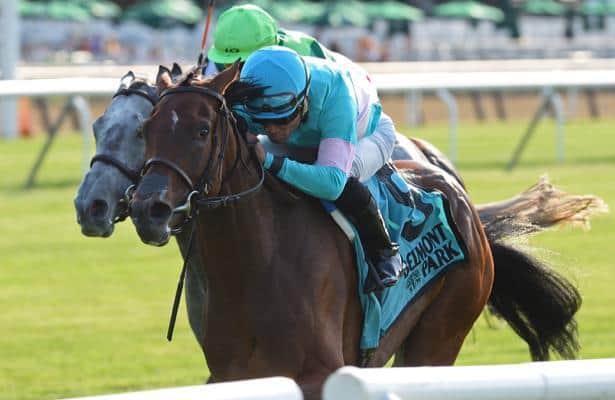 Saturday’s $500,000 Diana Stakes (G1) at Saratoga will feature a field of eight older fillies and mares going 1 1/8 miles on the grass. Trainer Brendan Walsh, entered La Signare, who comes in off a runner-up effort in the Gamely (G1) at Santa Anita on May 31.

“She’s done well, and she’s placed in a Grade 1 twice,” Walsh said. “I’m looking for her to have her day and try to win one with her, but she’s gone up there in good shape, she’s doing really well up there.”

The 6-year-old Siyouni mare faces off against a field that includes the top two finishers in the Just a Game. Both Althiqa, who won that race, and Summer Romance are owned by Godolphin and trained by Charlie Appleby.

Harvey’s Lil Goil, winner of the Beaugay (G3) before finishing fifth in the New York (G2), will start from post position 5 for trainer Bill Mott. Lemista, who finished second in the Beaugay, is also in the field for trainer Chad Brown as is Pocket Square, fifth in the Just A Game in her most recent trip.

Ricardo Santana Jr. will ride La Signare, who will start from the rail. Before the draw Walsh said he was hoping the race would set up with “plenty of pace.”

“There’s been plenty of rain up there, so there should be a little cut in the ground,” Walsh said. “That wouldn’t hurt her.”

Walsh also has a starter in Saturday’s other Saratoga stakes race, the $150,000 Sanford (G3) for 2-year-olds going six furlongs on the main track. Candy Landing comes into the race after breaking his maiden by 4 1/2 lengths first time out at Churchill Downs going 5 1/2 furlongs on June 11.

“I knew he was a nice horse, but that was a little more impressive than I expected,” Walsh said of that trip. “Most of mine they need to first run. I think there’s plenty of improvement in that. He was very professional, broke really well, when asked he quickened well, so you get a horse like that this time of year there's really only one place to go.”

James Graham will be aboard the Twirling Candy colt.

Walsh said he had no concrete goals for Candy Landing beyond Saturday’s race.

“He’s a precocious horse,” he said. “Physically, he’s really nice and filled out and gotten stronger. He looks like a 2-year-old for this time of year. We’ll run him Saturday and see how that goes.”

Candy Landing will face a field of 11 other juveniles in the Sanford, headlined by Wit, running for Todd Pletcher, who broke his maiden by six lengths at Belmont on June 5.