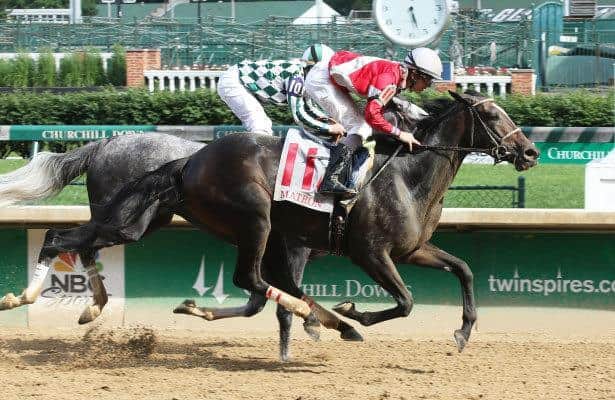 Ridden by Brian Hernandez Jr. for trainer Ian Wilkes, Walkabout clocked 1 1/16 miles over a fast track in 1:44.06 to beat 10 other fillies and mares in dramatic come-from-behind fashion.

Belle Hill and Improv flashed early speed and led the field through the first quarter mile in :23.52 before Improv inched ahead down the backstretch after a half-mile in :47.03 and six furlongs in 1:11.57. Walkabout had one horse beat early on and trailed the leaders by as many as 15 ½ lengths after the first four furlongs.

Improv, ridden by James Graham, looked as if she might steal the race at odds of 28-1. She had a two-length lead at the top of the stretch but Walkabout was hitting her best stride late. Hernandez swung the 4-year-old filly eight-wide on the turn for home, overcame mild contact with rival Tiger Moth in mid-stretch and powered home to spoil an Improv surprise.

The Matron was Walkabout’s first stakes win – an important milestone for any future broodmare. She banked the $58,280 first prize and rewarded her backers with $12, $5.40 and $4 as the 5-1 third betting choice. Improv paid $20 and $10.60. Divine Elegance was another 2 ¼ lengths back in third under Miguel Mena and returned $8.80.

Walkabout, a homebred daughter of Stroll out of the Broad Brush mare Arlucea, notched her fourth win in 11 starts and improved her career earnings to $219,033. Last year, she finished fifth in the Indiana Oaks (GII) and Remington Park Oaks before a third-place finish against elders in the Falls City Handicap (GII) at Churchill Downs.

The Matron was staged for the 80th time, but this was the first renewal at the Louisville, Ky. racetrack. The race would have gone on hiatus in 2017 if Churchill Downs Racetrack didn’t step up to host the important Midwest race for fillies and mares. Previously, it was staged at its Churchill Downs Incorporated sister track, Arlington Park near Chicago.

Brian Hernandez Jr., jockey of Walkabout (winner): “Around the first turn, we were way back there. That’s just the sort of horse she is, though. We came rolling at the end. We figured out the type of running style she has over the last couple of starts. All I have to do is stay out of her way.”

Ian Wilkes, trainer of Walkabout: “It took us this last year to figure her out. She originally ran closer to the pace but she made us understand to be patient. She was always traveling well and when I saw the horses bunch together on the front end I wasn’t worried at all. Brian (Hernandez Jr.) rode her great going around all of the speed horses and not getting her stopped.”

“Rusty” Arnold II, trainer of Improv (second) and Weep No More (fifth): “I think a lot of people thought I was running her (Improv) as a rabbit but I wasn’t. She had really done well since her last race. The other filly (Weep No More) ran all right. She hasn’t been out in eight months and she needed to get feet back under her. She did late, but then got tired. We just wanted to get her back going. It’s tough to find a race for a horse like that. Now we’ve got (Improv) back to herself and she’ll be in the Fleur De Lis, hopefully.”

James Graham, jockey on Improv: “She ran a huge race. If they’d left me alone and let me send her a little bit, she might have been good enough to hang on today. But today wasn’t her day.”