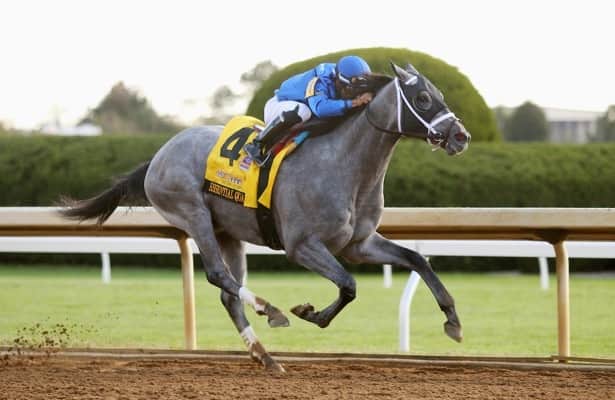 Note: This report was posted before Oaklawn Park announced that it would postpone the Southwest Stakes, Razorback and Bayakoa stakes from this weekend to Feb. 20. This report may be updated.

The highly anticipated return of juvenile champion Essential Quality to the 2021 Kentucky Derby trail in Monday's Grade 3 Southwest Stakes at Oaklawn and Monomoy Girl's 2021 debut might not happen this weekend.

That's because snow, freezing rain and cold temperatures are forecast in the Hot Springs, Ark., area for the holiday weekend. Track officials are expected to determine soon whether they will have to postpone racing because of anticipated harsh weather.

The Southwest was shaping up as a rematch between Essential Quality, winner of the Breeders' Cup Juvenile last out, Jackie's Warrior, four-for four until a fourth-place finish in the Juvenile.

In addition to Essential Quality, trainer Brad Cox has other horses in play at Oaklawn this weekend.

Wells Bayou and Owendale are entered in the Grade 3 Razorback (G3) at Oaklawn on Saturday and Kentucky Derby points leader Essential Quality is likely to take on Jackie's Warrior on Monday in the Southwest (G3).

Also, Monomoy Girl was pointed to the Bayakoa (G3) at Oaklawn on Monday. Cox said that's still the plan for the champion older female — "whenever they run it, hopefully."

"I think Oaklawn’s going to answer a lot of your questions later today," Cox said Wednesday morning. "I’m going to have to wait and see what happens."

Jennifer Hoyt, the track's media relations manager, said: "We won’t be making any decisions until probably later today or tomorrow."

Jimmy Bell, president of Essential Quality's owner and breeder, Darley America, said: “I think Mother Nature, looking forward to the Southwest, it looks like we are going to be paying as much attention to the forecasters' comments on the weather as we are the handicappers.”

Cox has another option for Wells Bayou, who was third in the Louisiana Derby (G3) last out. He's also entered in the Mineshaft at Fair Grounds on Saturday.

As for the others, he just doesn't know yet.

"We’ve got a lot of question marks on what’s going to happen this weekend with weather."