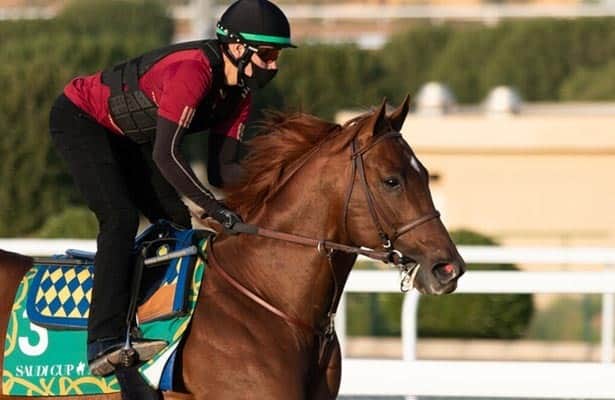 Here's a look at each of the five.

Charlatan "has settled into a great routine," according to a Friday Twitter post by Tom Ryan, principal of co-owner SF Racing. "He's thriving after his flight.Trained by Bob Baffert, Charlatan won the Grade 1 Malibu Stakes at Santa Anita in his most recent start Dec. 26. The Speightstown colt will make his 2021 debut in the Saudi Cup.

Knicks Go also is settled in, according to this tweet from the Maryland Jockey Club. Trained by Brad Cox, Knicks Go began 2021 with a win in the Pegasus World Cup (G1) on Jan. 23. Before that, the son of Paynter capped off his 4-year-old season with a win in the Breeders’ Cup Dirt Mile on Nov. 7.

Max Player also arrived last week for trainer Steve Asmussen. The 4-year-old son of Honor Code will be looking for his first victory in more than a year after winning the Withers (G3) at Aqueduct on Feb. 1, 2020. In his last race, the colt finished fifth in the Preakness Stakes.

Sleepy Eyes Todd comes into the Saudi Cup after a fourth-place finish in the Pegasus World Cup. Trained by Miguel Silva, the 5-year-old closed 2020 with a win in Gulfstream's Mr. Prospector (G3) on Dec. 19.

Rounding out the U.S. contingent, Tacitus returns to the Saudi Cup after finishing fifth in last year's edition.