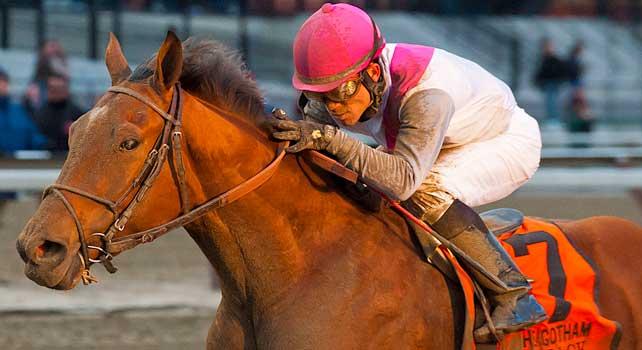 Vyjack was declared ready for the Grade 1, $1 million Wood Memorial on April 6 after breezing on Saturday at Aqueduct Racetrack.

Working in company with Aussi Austin, Vyjack was credited with a six-furlong work in 1:12.63 by the NYRA clocker.

Vyjack began the breeze two lengths behind Aussi Austin. After dropping back an additional length in the first furlong, Vyjack engaged Aussi Austin about 3 ½ furlongs from the finish. Both runners were restrained in the stretch, with Vyjack finishing a head in front of his workmate.

“He came home good, was relaxed, and set himself up perfectly for the race,” said owner David Wilkenfeld, who unofficially timed Vyjack in 1:13 3/5.

Gustavo Rodriguez, who was aboard Vyjack for today’s workout as well as his five-furlong drill on March 22, said teaching the gelding to settle behind another horse was an emphasis of this breeze.

“We wanted the other horse to go and for [Vyjack] to relax,” said Rodriguez. “We want him to be relaxed, because when he runs in the Wood we want him to come from behind. I’m very, very happy with the work. We didn’t want to go like last time – we wanted to go a little slower.”

Vyjack has raced exclusively at Aqueduct and is unbeaten in four starts, including a head victory in the Grade 2 Jerome in January and a 2 ¼-length win in the Grade 3 Gotham on March 2, both contested on the inner track.

“His first two races were on the main track, and he ran well in both of those races,” said Wilkenfeld of Vyjack’s maiden score and victory in the Traskwood overnight stakes. “I think the wider turns will suit him better, and hopefully we’ll have an even, honest racetrack for the Wood and that the best horse will win.”

Vyjack is expected to face another unbeaten runner, Verrazano, in the Wood.

“The waters constantly get deeper, and this is a good test for him,” said Wilkenfeld. “I think Vyjack will be the best horse Verrazano has faced to date. There are some other quality 3-year-olds in the race, so I think it’s going to be one of the better prep races.”