Vivlos Runs Down the Boys in Dubai Turf 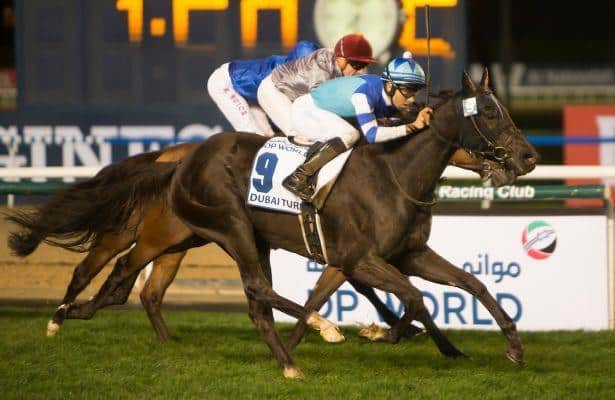 Jockey Joao Moreira left Meydan spellbound by his magic touch as he conjured a dashing late run from the Japanese filly Vivlos (JPN) to capture the Dubai Turf sponsored by DP World.

Quietly ridden for most of the race by the brilliant Brazilian, Vivlos cut down the French-trained Heshem (IRE), who looked likely to pull off a shock result at the 200m, inside the final strides of US$6 million showpiece to win by half a length. An identical margin behind finished Ribchester (IRE) in third having raced prominently throughout.

Japan was making it three wins in the last four renewals of the race following successes by Just A Way (JPN) in 2014 and Real Steel (JPN) last year. The latter was scratched earlier in the week from defending his crown. Interestingly, all three runners had prepared for the Dubai Turf by competing in the Grade 2 Nakayama Kinen in Tokyo.

Hong Kong’s champion jockey Moreira, enjoying the third win of his career on the world’s richest race meeting, was overjoyed with the performance by Vivlos.

"She was brilliant,” he enthused. “From the time that I sat on top of her on Friday, she gave me the feel that she was going to be very competitive. She was probably one of the lightest horses in the race. If the ground was soft, which is probably what the people were thinking about, she wasn't sinking (into the turf) the most. I think that is why she was able to let down and was able to get there.

“Good horses make a jockey's life easier. She made the job very easy for me today. We were travelling nice and when I took her out and she had daylight, she was strong to the line.”

Trainer Yasuo Tomomichi, who was saddling his first runner at the meeting, added: "She travelled very well from Japan and she was very relaxed in Dubai. She relaxed again in the back of the field and quickened very well. It kept raining but the ground wasn’t too soft, which suited her.”

Jockey of the runner-up Heshem, Gregory Benoist, said: “For half of the home straight I thought I was going to win easily but the rain has affected the ground and that doesn’t suit him. If it had been good ground we would have won but for him that is still a career best finishing second.”

Race favourite Zarak (FR) appeared to have every chance under treble-chasing Christophe Soumillon but he could only finish fourth.