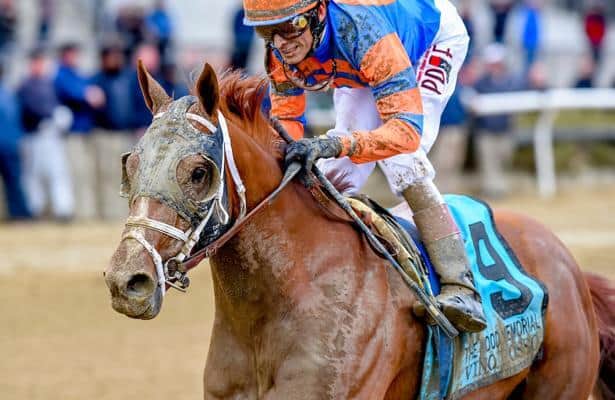 St. Elias Stable and Repole Stable’s Vino Rosso captured the Wood Memorial (G2) prior to an off-the-board finish in the Kentucky Derby. The Todd Pletcher-trained son of Curlin went on to finish fourth in the Belmont Stakes (G1), third in the Jim Dandy (G2) and fifth in the Travers (G1) before going to the sideline.

Trainer Rodolphe Brisset is targeting the mile stakes for 4-year-olds for Quip’s return from a nine-month layoff after scratching the son of Distorted Humor from Saturday’s Mineshaft Handicap (G3) at Fair Grounds due to a "bad draw," outside in post 13.

Owned by WinStar Farm LLC, China Horse Club International Ltd. and SF Racing LLC, Quip captured last year’s Tampa Bay Derby (G2) prior to finishing second in the Arkansas Derby (G1). Quip skipped the Kentucky Derby (G1) and finished off the board in the Preakness Stakes (G1) after a troubled start. The WinStar homebred has been working sharply at Payson Park in Indiantown, FL.

Richard Otto Stables Inc.’s Sir Anthony was also nominated to the Hal’s Hope off a graded stakes victory during the Championship Meet. Anthony Mitchell-trained Sir Anthony rallied from off the pace to upset heavily favored Audible by a half-length in the Dec.15 Harlan’s Holiday (G3) at Gulfstream.

Graded stakes winners Imperative, Mr. Freeze, Mr. Jordan, Noble Indy and Wild Shot have also been nominated to the Hal’s Hope, which will headline a program that will also offer the $75,000 Melody of Colors, a five-furlong turf sprint for 3-year-old fillies, and $75,000 Texas Glitter, a five-furlong turf sprint for 3-year-olds.