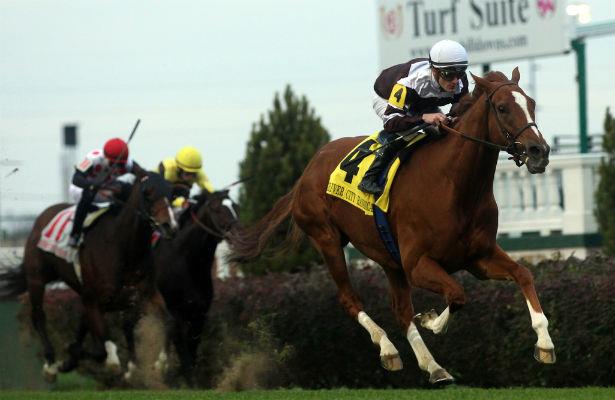 Saturday’s 29th running of the Grade III $100,000 Colonel E. R. Bradley Handicap at 1 1/16 miles on the Stall-Wilson turf course, which commences a 50-cent all-stakes pick-4 as the eighth of 12 races, is led by Gainesway Stable’s 120-pound highweight Villandry, a dominant victor of the Grade III $100,000 River City Handicap on Nov. 8 at Churchill Downs.  Trained locally by the capable hands of David Carroll, who has taken over the winter conditioning of the son of Mr. Greeley for trainer Charlie LoPresti from his Fair Grounds Race Course base, the chestnut 6-year-old gelding has four strong local works and will receive the services of Florent Geroux from the outside post nine.

Serious competition for Villandry could come from Gary and Mary West’s improving 4-year-old Highball.  Trained by Wayne Catalano, the strapping son of Lemon Drop Kid exits a deceptively good second in an off-the-turf running of the one-mile $60,000 Woodchopper Stakes at the New Orleans oval on Dec. 27.  A return to his preferred grassy surface should assist the lightly raced colt who is graded stakes-placed and chased Coolmore’s subsequent Group I Cox Plate winner Adelaide home when fifth in August’s Grade I $500,000 Secretariat Stakes at Arlington International.  Shaun Bridgmohan rides from post three.

Charlie Smith’s Louisiana-bred warrior String King will look to make his 7-year-old debut a winning one when he enters the gate for the Bradley for a third time.  Second in 2013 and a close fourth in 2014, the ageless gelding exits an easy win in the $100,000 Louisiana Champions Day Turf and has 14 victories in his 33 lifetime starts for just shy of three-quarters of a million dollars in earnings.  The son of Crowned King will break from post five with the return services of James Graham.

Al and Bill Ulwilling’s Gary Scherer-trained Pumpkin Rumble, who has not finished worse than fourth in a quartet of career stakes tries, finished a half-length behind Highball when splashing home third in the aforementioned Woodchopper.  A son of champion turf horse English Channel, Pumpkin Rumble was a game fourth in the Grade III $500,000 Hill Prince Stakes on Oct. 4 two races back and should also appreciate a return to the grass.  Miguel Mena rides from post two.

Team Valor International’s Infinite Magic will look to return to the form that won him the Grade III $200,000 American Derby and placed him second in the Grade II $250,000 Del Mar Derby – both in 2013.  The Wayne Catalano-trained son of More Than Ready is winless in his last eight races, but does exit a game fourth in a quickly contested Churchill Downs allowance and will be making his fourth start under the tutelage of his very capable conditioner.  Robby Albarado picks up the mount and will break from post four.