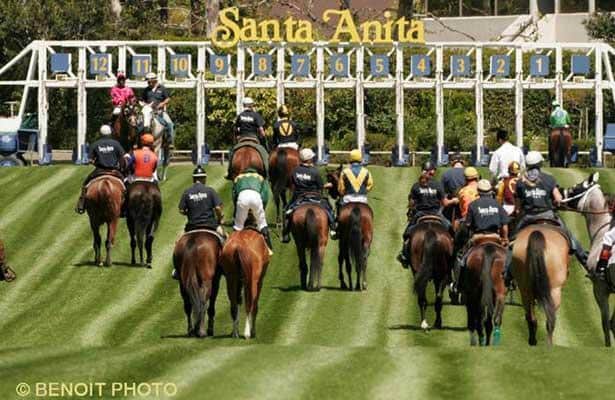 Vigilante, a lightly raced son of two-time Breeders’ Cup Classic winner Tiznow, makes his stakes debut in the Grade II Mathis Brothers Mile on turf Opening Day.
Phil D’Amato is hoping for a solid performance, based on how the three-year-old bay colt owned by Gary and Mary West has been training.
“He came in from back East after running at Keeneland on Oct. 21,” the trainer said. “We’ve had him for a little while and he’s doing well, so we’ll give it a shot.”
A committed stretch runner, Vigilante came from 10th and last at the half-mile marker to win a one-mile allowance race on turf by three-quarters of a length in the Keeneland race.
ANOTHER OPENING, ANOTHER SHOW FOR RON McANALLY
Ron McAnally has been around the track a few times. The legendary Hall of Fame trainer, who turns 84 come next July 11, has been at every Santa Anita meet since 1948, save 1950 and 51, when he served two years in the Air Force.
A fixture at his Clockers’ Corner table as early as 6:30 when temperatures have hovered near the freezing mark on recent mornings, McAnally is sharp of mind and in relative good health as Santa Anita embarks on its 79th season the day after Christmas, Dec. 26.
Born in Covington, Ky. and raised in an orphanage with two younger brothers and two sisters, McAnally would go on to reach racing’s greatest heights, training 12 national champions, the most famous of which was two-time Horse of the Year John Henry.
He walked hots for his uncle, Reggie Cornell, trainer of the mythical stretch runner, Silky Sullivan, whose breathtaking rushes from last to first in the late 1950s would make him a household name.
“I was a groom mucking stalls at Santa Anita with this little guy at the next barn, right where Paddy Gallagher is stabled now,” remembered McAnally, one of the oldest, if not the oldest, active trainers still on the beat. He might have more rings around his trunk than any of his contemporaries.
“I went into the Service and when I came back, this guy was all the rage, winning races left and right. I didn’t know who he was.”
The man was Bill Shoemaker.
“I came here in 1948 in the dead of winter,” McAnally said, “and Lefty Nickerson had come in from the East Coast. It snowed like hell while he was here and he looked at me and said, ‘I thought it never snowed in Southern California.’”
McAnally, ably assisted by former trainer Dan Landers since 1995, isn’t winning in bunches like he did three decades ago, but he takes it in stride, waxing philosophically.
“No trainer can win races with bad horses,” he says. “But life goes on.”
Indeed.

FINISH LINES: Santa Anita will give away its popular full color Wall Calendar free on Opening Day to all fans at the track with paid admission while supplies last . . . The first 20,000 paid attendees will receive a $100 Mathis Brothers Furniture gift certificate, and the first 5,000 kids 17 and under accompanied by a paid adult will get a plush, mini-Thoroughbred toy, courtesy of the Mathis Brothers . . . Santa Anita will offer an opening day Trackside Package that includes special trackside seating, a free first drink, and an officially licensed American Pharoah T-shirt commemorating the first-ever Grand Slam champion of horse racing. Use promo code PHAROAH for $5 off the package price . . . Santa Anita Derby winner Dortmund, who worked five furlongs Thursday in 1:00.40 for Bob Baffert, will not run in the Malibu, the Hall of Fame trainer said Friday morning. “I don’t want to back him up,” Baffert said, alluding to the 1 1/8-mile Native Diver Stakes Dortmund won on Nov. 28 and the seven furlong Malibu. A more likely spot for the son of Big Brown would be the Jan. 9 San Pasqual Stakes at a mile and a sixteenth and a likely confrontation with 2014 Horse of the Year California Chrome . . .  Another candidate for the San Pasqual is Gold Cup at Santa Anita winner Hard Aces trained by John Sadler, who said Santa Anita Oaks winner Stellar Wind is enjoying some R&R and won’t start back until mid-meet, with the Breeders’ Cup at Santa Anita a long-range goal . . . Triple Crown-winning jockey Victor Espinoza, a finalist for Santa Anita’s George Woolf Memorial Jockey Award, was a visitor to Clocker’s Corner Friday morning, recently back from Hong Kong where he participated in a Jockeys’ Challenge competition . . . Agent Nelson Arroyo reports that Stuart Elliott arrives from Kentucky next Friday to ride full time at Santa Anita. Arroyo also represents Abel Cedeno, who has been busy in the mornings working horses for alpha trainers Richard Baltas, Jerry Hollendorfer, Peter Miller, Doug O’Neill and Sadler . . . Multiple graded stakes winner Taris worked four furlongs Friday in 49.40 for trainer Simon Callaghan . . . Agent Michael Burns has taken the book of jockey Jose Verenzuela. The 48-year-old has been riding more than 25 years and ridden more than 1,500 winners with his biggest victory coming in the $2 million Group 1 Dubai Golden Shaheen at Nad Al Sheba in 2009 aboard the Jerry Barton-trained Big City Man for Saudi Prince Sultan Mohammad Saud Al Kabeer. A native of Venezuela and a countrymate of North America's leading jockey by earnings Javier Castellano in addition to hot-riding Santiago Gonzalez, Verenzuela also rode for three seasons in Singapore, with his biggest success coming aboard Flax in the $500,000, Group 1 Raffles Cup in 2012. Burns also represents 25-year-old Gonzalo Nicolas, who began riding as a journeyman on Memorial Day and has ridden 51 winners . . . Greg Hendricks, 20-year-old son of trainer Dan Hendricks, was aboard multiple stakes winner Om as he galloped Friday morning in preparation for the Mathis Brothers Mile. “Greg’s been galloping for me since he was 16,” Dan said . . . Serving coffee free at Clockers’ Corner, generously initiated by Los Angeles Turf Club Chairman Keith Brackpool two days ago, is proving a rousing success. “We served over 200 cups Thursday, double our normal amount,” said hostess Rosie Ybarra. “Before, everybody would walk around with a Starbucks. Now they walk around with a Rosiebucks.”