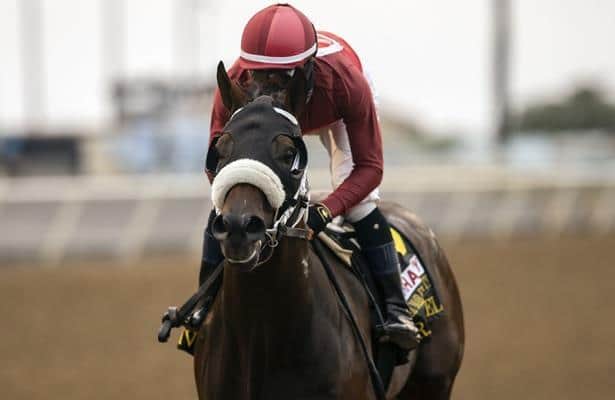 There might have been no fans in attendance "where the turf meets the surf" this summer, but the 2-year-olds still put on a show worth seeing.

Dr. Schivel's Del Mar Futurity score was the highlight of the meet for 2-years-olds as he vaulted himself into a leading Breeders' Cup Juvenile contender, but he was not the only impressive juvenile to run at Del Mar. Below, we take a look back at the top 2-year old performances of the meet.

This colt by Violence looked like nothing special after his first two starts in the maiden ranks. He was third at Santa Anita and second in a slow affair at Los Alamitos. Then he came to Del Mar and everything changed. He romped home against the highly touted Spielberg on Aug. 8 and came right back and validated that victory against the same colt in the Del Mar Futurity (G1) on Monday. It is possible that he just loves Del Mar, but it is more likely that the lightbulb has gone on for this rapidly maturing colt.

Victorious in the GI Runhappy Del Mar Futurity it is Dr. Schivel with jockey Flavien Prat aboard for trainer Luis Mendez. pic.twitter.com/Fz9f96Eh11

Bob Baffert's filly has the look of a superstar after two effortless victories to start her career. She broke her maiden at Del Mar on Aug. 22 and returned two weeks later to win the Del Mar Debutante (G1) in a canter. She is the likely early favorite for the Breeders' Cup Juvenile Fillies, and the sky seems to be the limit for this daughter of Not This Time.

Freedom Fighter had to work hard to win his debut, but he was professional in doing so and his performance continues to look better by the day. The swiftly run race produced a 78 Beyer Speed Figure for the winner, and Freedom Fighter defeated two runners on this list that returned to win impressively. This son of Violence should continue to improve with distance for trainer Bob Baffert.

Vittorio ran fifth to Freedom Fighter after breaking slowly and racing greenly on debut. The son of Ghostzapper figured things out in start number two, breaking maiden on Aug. 29 in smart fashion for trainer Simon Callaghan. He is bred to run all day and is just scratching the surface in these sprint races. Look for him to be extremely dangerous on the stretch out next time.

This son of Dominus ran fourth to Freedom Fighter on debut and similar to Vittorio, took a giant step forward in his second start on Aug. 16. He showed top-flight speed and defeated the highly touted North Pole. Wyfire gives Luis Mendez a second runner on this list. He seems better suited to sprint races in the future, but it will be interesting to see if he can carry his speed a route of ground, because his talent appears to be immense.

The son of Mr Big staked his claim as the leading turf juvenile in California with a win in the Del Mar Juvenile Turf on Sept. 8 for trainer David Hofmans. He has improved in every start and as a Cal-bred, he will have plenty of options down the road. He is bred for the turf, but it would not be a surprise to see the connections give this talented runner another try on the dirt (he was second on debut).

Victorious in the GI Runhappy Del Mar Futurity it is Dr. Schivel with jockey Flavien Prat aboard for trainer Luis Mendez. pic.twitter.com/Fz9f96Eh11

This daughter of Bodemeister was very impressive on debut while defeating the well regarded Illumination. She out-finished Illumination once more in the Del Mar Debutante, but was no match for runaway winner Princess Noor. There might not be any 2-year-old fillies on Princess Noor's level, so there certainly was certainly no disgrace in losing to her. The Peter Miller trainee has a bright future and should continue to progress with distance.

Country Grammer will miss a month because of ankle trouble
Nearly two months after his first Grade 1 triumph...

10 away from record, Asmussen has 7 starters on Sunday
After one win Saturday, Hall of Famer Steve Asmuss...