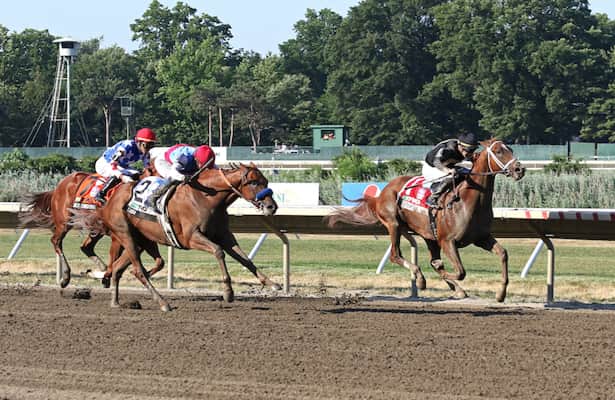 It’s been a productive summer for Cyberknife, given his wins in the Matt Winn (G3) and Haskell (G1) plus a runner-up finish in the Aug. 27 Travers Stakes (G1).

Trainer Brad Cox said he did not initially plan to run Cyberknife in Saturday’s $1 million Pennsylvania Derby (G1) at Parx after the Travers. But with the colt training so well since arriving at Churchill Downs from Saratoga, Cox decided to go ahead and take a shot.

Cyberknife drew post 5 in the 11-horse Pennsylvania Derby. He is the 3-1 second choice on the morning line.

“He’s had two good works since shipping here to Churchill from Saratoga. We’re trying to get to the Breeders’ Cup and he’s doing so well, I felt I could run him,” Cox told longtime turf writer Jennie Reese. “It’s not like we’re just running. It could add some value to him as a stallion. It’s a million-dollar race and a Grade 1. We think it makes sense to take a swing.”

In the Haskell, Cyberknife and Florent Geroux won by a head over Taiba, who also is entered in the Pennsylvania Derby. Taiba is the slight 5-2 favorite on the morning line.

“We don’t know where we’re going to lean yet. A lot of that might have to do with what happens on Saturday, how he comes out of it and how he trains.”

The Pennsylvania Derby is one of 10 stakes on Saturday’s card from Parx. It has a scheduled post time of 6:10 p.m. EDT.