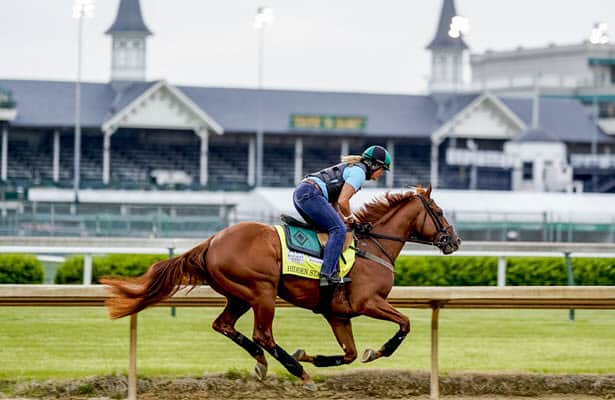 If the ground is shaking and eyeballs are popping out of the heads of Kentuckians all over Churchill Downs early Saturday evening, then something wild just happened in the 147th running of the Kentucky Derby.

Like Hidden Stash – who is 50-1 on the Derby morning line -- winning the most famous horse race in the land.

The chestnut colt will be one of the longest shots when the field of 20 is sent on their way in what is known as the most exciting two minutes in sports. If he were to win, Hidden Stash would be the newest member of the Mount Rushmore of improbable Derby winners.

Already there are Giacomo, the 2005 winner, and Mine That Bird from 2009. They both blew up the Derby tote board when they won the Derby at odds of 50-1.

And don’t forget Country House. The 2019 champ was 65-1 when he shook the Churchill rafters and won the race, albeit by disqualification.

Yup, Hidden Stash would be a surprise winner for sure. An upset win by the son of Constitution would also be historical for another reason. It would put a female trainer in the winner’s circle for the first time ever.

Vicki Oliver has that chance to put her name into the thoroughbred record books. And, oh, yes, she is quite aware of the history lesson she could teach if Hidden Stash finds his way to the winner’s circle.

The 48-year-old Oliver will be the 18th female trainer in the Run for the Roses. The last time a female was in the race was 2015 when Carla Gaines saddled Bolo to a 12th place finish. The best finish for a female trainer came from  Shelley Riley, whose Casual Lies was second in 1992.

“No, I’m not tired of getting the question,” Oliver said of the writers and broadcasters who have brought it up this week. “It’s obviously part of it. It’s exciting to be a part of it.”

Now the trick will be getting Hidden Stash on board.

Hidden Stash, a son of Constitution, has two wins in seen career starts. In three starts this year, he was second in the Tampa Bay Derby, beat three quarters of a length by Helium, who is also in the Derby, third in the Sam F. Davis and fourth in the Blue Grass.

In the Blue Grass, Hidden Stash was 10 lengths behind the winner, Essential Quality, who will be the Derby favorite.

Hidden Stash, who will be ridden by Rafael Bejarano, has two races at Churchill Downs on his resume. He was third in his second career start here on Sept. 18 and then won an optional claimer in November.

“We might as well take a shot while we can,” Oliver said. “This is the opportunity to take on the top 3-yea-olds and maybe get the trip. Maybe everything falls into your lap for the Derby. It’s not like we think he is the best horse in the race, but we certainly think we deserve a shot to have a run in it.”

Maybe Hidden Stash would have made up more ground in the Blue Grass if he would have changed leads in the stretch.

“The biggest concern we have is that he doesn’t want to switch leads,” Oliver said. “He does it in the morning, but not in races.”

Oliver, originally from St. Louis, grew up in horse racing. Her father, G. Watts Humphrey Jr., was a breeder and owner and taught his daughter about the business. Before she became a trainer 22 years ago, Oliver was an exercise rider and a show rider. She got into training with her husband, Phil, whom she met on the race track.

Hidden Stash is owned by the syndicate group BBN Racing. Braxton Lynch, one of the founding partners and the racing manager, has been a life-long friend of Vicki Oliver. Lynch remembers spending summers in Saratoga with Oliver as kids while their families did the racing thing.

“My grandmother’s box and her father’s box were 10 feet apart,” Lynch said. “We would roam around Saratoga riding our bikes here, there and everywhere.”

The friendship between Lynch and Oliver kept and now, here they are. Lynch has nothing but good things to say about the work ethic of her friend.

Of course, she is rooting for her. The fact that it is with one of her horses makes it even more special.

“It’s unbelievable how much work she has put into this,” Lynch said. “She has been doing it for over 20 years. I tell you, it’s not an easy business being a woman. It wasn’t an easy business 25 years ago when we both got into it. It’s hard work. Man, woman, whatever. You have to put in the work.”

Oliver gallops 10 horses a day from her stable, which she said numbers about 40.

The Oliver Racing Stable spends the winter months in Florida and is based at Kentucky from April through November. She has won a handful of graded stakes races, the biggest being the Grade I Del Mar Oaks  in 2014 with Personal Diary.

And now here she comes in the biggest race of them all. If Hidden Stash is going to make some noise in this race, it will come with a late run in the stretch.

Like everyone else in the race, Oliver knows the horse to beat is Essential Quality, the 2-1 morning line favorite.

“There is a heavy favorite, and then it’s anyone race after that,” she said. "Essential Quality might not show up. You never know.”