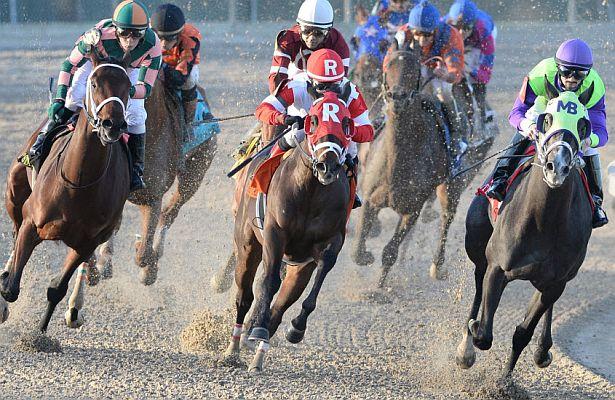 Ken and Sarah Ramsey’s Vicar’s in Trouble, dominant 6 ¾- length hero of the Grade III Lecomte Stakes at Fair Grounds Race Course & Slots on Jan. 18, may be a slight choice in the wagering when he faces an overflow field of 13 challengers with two also-eligibles in Saturday’s Grade II Risen Star Stakes presented by Lamarque Ford, the Crescent City oval’s showcase event on Louisiana Derby Preview Day presented by Lamarque Ford.

The $400,000 Risen Star, to be contested at 1 1/16-miles, serves as Fair Grounds’ final designed prep for the 100th renewal of the upcoming $1 million Louisiana Derby March 29, penultimate day of the winter racing season in New Orleans.

The Risen Star is part of the elite “Kentucky Derby Championship Series” which continues again Saturday and is worth 85 points toward qualifying for the Run for the Roses as part of the larger 34-race “Road to the Kentucky Derby” series.  The 50 points to be awarded to the Risen Star winner virtually guarantees a berth into the world’s most famous horse race on May 3.  The runner-up will earn 20 points, with 10 points to third and five points to fourth.

Trained by Mike Maker but under the local guidance of assistant Joe Sharp, Vicar’s in Trouble has Rosie Napravnik – three-time Fair Grounds defending jockey champ– named to handle the reins.  The Louisiana-bred son of Into Mischief has worked three times since the Lecomte, most recently breezing five furlongs in 1:01.20 Sunday morning.  Vicar’s in Trouble is assigned 120 pounds.

Paul and Andrena Van Doren’s Rise Up, winner of the Grade III $1 million Delta Jackpot last Nov. 23, has been based at Fair Grounds since shortly after the first of the year following a brief vacation in Ocala, Florida, and has posted four increasingly intensified works, most recently going a  half-mile last Saturday in :47.60.  Jockey Gerard Melancon has been slated for the saddle by 10-time Fair Grounds trainer champion Tom Amoss and will carry 120 pounds.

Sure to attract strong support in the Risen Star is the invading Intense Holiday, owned by Starlight Racing and conditioned by Eclipse Award-winning trainer Todd Pletcher, winner of two of the last four Risen Stars.  Mike Smith will be aboard the son of Harlan’s Holiday who was third in Gulfstream’s Grade II Holy Bull Stakes on Jan. 25.   Intense Holiday gets in with 116 pounds.

Not to be discounted in the Risen Star are Brereton Jones’s Albano and Winchell Thoroughbreds’ Gold Hawk, second and third respectively a neck apart behind Vicar’s in Trouble in the Lecomte.  Albano’s trainer Larry Jones has engaged Kerwin Clark as his jockey with 116 pounds assigned and Gold Hawk’s conditioner Steve Asmussen has tabbed Corey Nakatani for his charge at 116 pounds.

Hall of Fame trainer Bob Baffert is shipping Mike Pegram et al.’s Hoppertunity in for the Risen Star from Santa Anita where the son of Any Given Saturday broke his maiden by three lengths in his last start Jan. 30.  Martin Garcia gets the mount at 116 pounds.