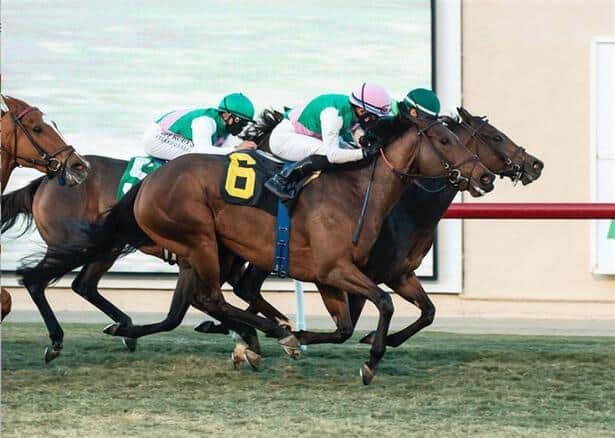 Chad Brown was contemplating sending multiple Grade 1 winner Newspaperofrecord to Del Mar for Sunday's $300,000 Matriarch (G1), but decided he had a strong enough hand with the three fillies he sent.

That proved to be the right decision as Juddmonte Farms' homebred Viadera got her nose down just in time to edge Blowout for a Chad Brown exacta in Del Mar's Closing Day feature.

Viadera & @JRosarioJockey catch Blowout & Flavien Prat at the wire in the Grade I Matriarch. pic.twitter.com/T32VL3wl3T

Blowout broke on top, but allowed Juliet Foxtrot to set a quick tempo of 45.63 for the opening half as she tracked in second.

Blowout made her move turning for home and seized control of the lead. The 4-year-old filly, who has never been worse than third in three lifetime starts, was game as could be but could not hold off Joel Rosario and Viadera's full steam move from the back of the pack.

“Whew. I had to work for that one, Rosario said after the race. "She’s a good filly, a really good filly. But she makes you work. I had to stay after her. She can run, though, there’s no doubt. I’m lucky that Chad Brown gives me an opportunity like this. Grass horses and especially fillies. He’s the best.”

Viadera paid $12.80 to win as money poured in on Tamahere, who many considered the best of Chad Brown trio. Tamahere made a wide move late, but could only manage a sixth-place finish.

Viadera has steadily climbed the class ladder since arriving in America from Ireland. The 4-year-old daughter of Bated Breath won her third in a row and first Grade 1 to improve her record to 13: 6-1-1.

She completed the mile in 1:33.03 while proving once more that she has a nose for the wire. Her last four wins have come by a neck or less. The final time broke the stakes record by more than a second.

Chad Brown came looking to conquer when sending a plethora of horses to California for Del Mar's Turf Festival this weekend. He did not disappoint with Grade 1 wins in the Matriarch and Hollywood Derby (Domestic Spending) and four wins overall this week at Del Mar.