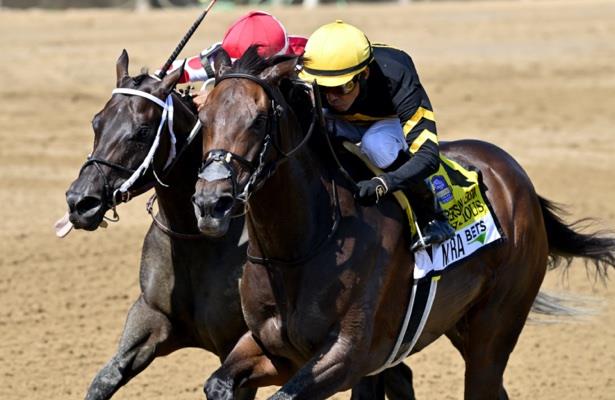 Trainer Jack Sisterson said he was still riding high from his first career Grade 1 triumph in Saturday's $500,000 Personal Ensign at Saratoga, which saw an upset victory when Vexatious bested reigning Champion Older Dirt Female Midnight Bisou in a dramatic stretch duel in the 71st renewal of the 1 1/8-mile event for older fillies and mares. The victory garnered a 105 Beyer Speed Figure.

In winning the Personal Ensign, a Breeders' Cup "Win And You're In" qualifier, Vexatious earned an automatic entry into the Breeders' Cup Distaff on Nov. 7 at Keeneland, where Sisterson is primarily based.

"My assistant Mark O'Dwyer was taking pictures of her once she was back in her stall. Her head was right at the front of the stall, her ears were pricked, so she knew what she did yesterday," Sisterson said. "Mark and the rest of the team has done a fantastic job with her, as well as the rest of the horses. That's what we live for, the opportunity to have horses in races like this, let alone win one.

"Words can't describe the feeling," Sisterson continued. "It just goes to show how good the people behind me are. I have a great staff and great owners. If it weren't for the staff or the owners, I wouldn't be in this position."

Owned by Calumet Farm, the well-bred Vexatious is a 6-year-old daughter of Giant's Causeway out of G1-winner Dream of Summer, making her a full-sister to G1-winning millionaire Creative Cause as well as multiple graded stakes winner Destin. A graded stakes winner on grass and five-time graded stakes placed on both dirt and turf, Vexatious enhanced her already high breeding value by acquiring G1 blacktype in the Personal Ensign.

Vexatious' only other start at Saratoga was a runner-up to subsequent Breeders' Cup Distaff winner Blue Prize in last year's Summer Colony.

Sisterson noted how well his mare handles training at Saratoga and said Vexatious will remain at the Spa, where Sisterson keeps a small string of horses.

"She'll stay at Saratoga for the time being," Sisterson said. "Keeneland is home for her, but she really blossoms up at Saratoga. We didn't want to be tough on her at the beginning of the year, so we ran her in some allowance races. I didn't want to disappoint her too early in the year to ultimately have her peaking at Saratoga mid-summer, and that's worked. She did so well here last year. She put on weight, her coat looked good and she did great."

Options for Vexatious' next start include the G1 Spinster at Keeneland and the G2 Beldame at Belmont Park.

"She'll tell us when she's ready to run back again. I assume it'll be one or the other," Sisterson said.

For Sisterson, the fun did not stop after the Personal Ensign as fellow Calumet Farm color bearer Everfast picked up a triumph against winners in the following race — a seven-furlong allowance event over the main track.

"He never lost his competitive step, so that was great for him. With him wining the way he did, it allows him to step forward into a bigger race now," Sisterson said of the runner-up of last year's Preakness and Haskell Invitational (G1).

"We'll see how he trains out of it. He broke his maiden going seven eighths and was obviously running those classic distances last year," Sisterson said. "I wasn't worried going into yesterday, just curious to see how he would respond to the seven-eighths distance. I thought seven eighths to a mile is good for him."

Initially breaking at the rear of the field, Everfast inched his way into contention as the race progressed and shook clear through the final furlong to a 2 1/2-length win.

"He did it well enough yesterday," Sisterson said. "He had a lot in reserve and [jockey] Joel [Rosario] rode him perfectly. Mark told him before the race, 'Ride him like he's a Christophe Clement horse,' and those instructions worked out well. It's great to see him back in the winner's circle."

The son of Speightstown was initially entered in last Saturday's Vanderbilt (G1) at the Spa but was scratched at the starting gate, which forced Sisterson to call an audible and send the dual stakes winner to the West Coast.

"He was training very forwardly and showing us signs he would run a big race," Sisterson said. "It was a big step up in class, but he was doing things in the morning that told us that he was ready."