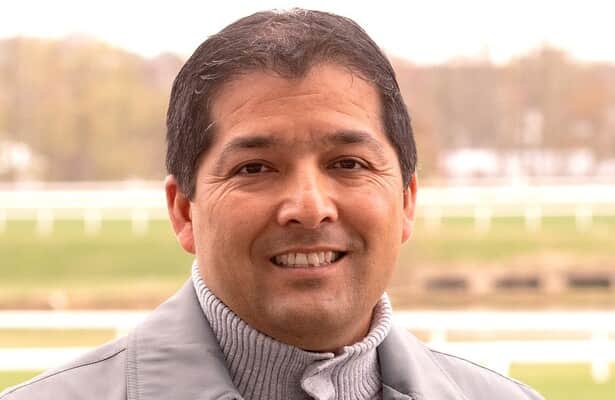 Gonzalez had one starter on Sunday’s nine-race program, running fourth with Blue Sky Painter in race 7, concluding the two-month stand with 40 wins, more than twice that of runners-up Mike Trombetta and Kieron Magee (19).

It marked the second straight Preakness meet title and 17th overall in Maryland for Gonzalez, 44, who survived a 2008 diagnosis of testicular cancer.

Among Gonzalez’s meet highlights were stakes wins by Harpers First Ride in the July 31 Deputed Testamony and both Miss Leslie in the Weber City Miss and Completed Pass in the King T. Leatherbury April 24.

Originally scheduled to run May 6-31, the Preakness meet began April 22 when racing was shifted from Laurel Park following an equine-herpesvirus outbreak and later extended due to a complete reconstruction of Laurel’s main track. Horses and personnel, relocated to various facilities including Pimlico and the Maryland State Fairgrounds in Timonium, returned to Laurel on April 8.

“It feels good,” Gonzalez said. “It was a little different this year. The good thing for me is I had my horses at Pimlico, and I believe that’s better for the horses when you’re training where you run. It makes it easier for us and the help, everybody.”

Gonzalez has won both full meets in Maryland this year following Laurel’s winter stand and was leading its spring-meet standings when live racing was moved to Pimlico after just four days. He has been Maryland’s overall leading trainer by wins each of the past four years.

“You feel pressure, because people might think it’s easy to win titles or win races. It’s not that easy. It takes a lot of hard work,” Gonzalez said. “I have to thank all the owners for supporting me and giving me a chance. The owners I have are really good, and they understand where we are with the horses and putting them in the right spots.”

Gonzalez said Harpers First Ride, a five-time stakes winner for Gonzalez, is getting some time off. Owned by GMP Stables, Arnold Bennewith and Cypress Creek Equine with wins in the 2020 Pimlico and back-to-back editions of the Deputed Testamony, is 2-for-2 since rejoining Gonzalez in May. That was after he made three starts for Midwest-based trainer Robertino Diodoro before being sold in January.

“I talked with the owners, and we decided to give him a little rest. He has run a couple good races with us and he deserves,” Gonzalez said. “It all depends on how he looks on the farm where he is. Maybe we give him a few months over there, and then we’ll see how he does.”

Marquez, 18, captured Pimlico’s Sunday opener aboard Lost Uncle (2-1) to give him 49 wins. J.D. Acosta finished second with 40 wins, two ahead of Jevian Toledo in third.

It was the first career riding title for Marquez, a native of Columbia, Md. His 58 wins made him Maryland’s leading apprentice of 2020. He had two or more wins on a single card 14 times at the Preakness meet, during which he graduated to journeyman status May 30 and also posted multi-win days at Colonial Downs and Delaware Park.

“It means a lot to me,” Marquez said. “We moved here in April, and to hold the lead all the way until now is pretty hard to do, a lot of the riders say. I’m proud of myself, and I can’t help but think of and thank everyone that helped me.”

The 146th Preakness Stakes highlighted the meet, returning to mid-May after being pushed back to October last year because of the pandemic. It was won by Rombauer, giving trainer Mike McCarthy his first Triple Crown race victory.

Other graded-stakes winners over Preakness weekend were Last Judgment in the Pimlico Special, Somelikeithotbrown in the Dinner Party (G2), Red Ghost in the Miss Preakness (G3), Spice is Nice in the Allaire du Pont (G3), Mighty Mischief in the Chick Lang (G3), Mean Mary in the Gallorette (G3) and Special Reserve in the Maryland Sprint (G3).

Live racing in Maryland moves to Timonium for the Maryland State Fair meet Friday-Sunday next week and the holiday weekend of Sept. 3-6 before returning to Laurel Park for its calendar year-ending fall stand starting Thursday, Sept. 9.

Laurel’s grandstand will be open Wednesdays through Sundays during the State Fair Meet. The entire main floor of the clubhouse will be open on Saturdays as well as the grandstand’s Sports Book bar.

Doors will open at 11 a.m. at Laurel on Saturday to accommodate a first-race post of 11:35 a.m. EDT at Saratoga for its Travers day program.