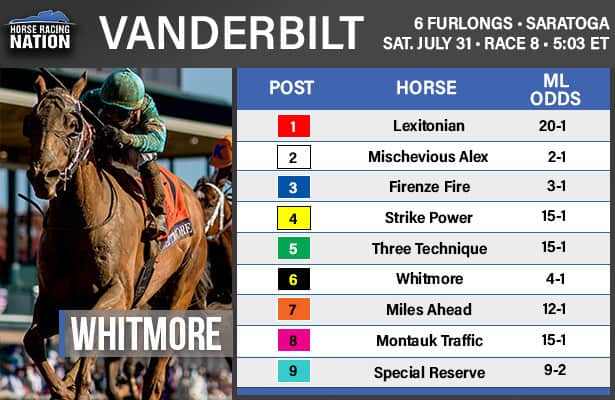 The Grade 1 $350,000 Alfred G. Vanderbilt Handicap on Saturday has attracted a talented field of nine that will race six furlongs. Together the veteran sprinters have won 66 races and just under $10 million in purse money.

Here is a full-field analysis of the Vanderbilt with the official Saratoga morning line odds. The Vanderbilt is race 9 out of 11 with post time scheduled for 5:03 p.m. EDT.

1. Lexitonian (20-1 – Speightstown – Jack Sisterson / Jose Lezcano – 18: 4-2-2 - $495,182) This 5-year-old horse has only one win in the last two years and that came more than a year ago in an allowance at Churchill Downs. Last seen he was eased in the Met Mile (G1) but before that the Calumet Farm homebred was second by head in the Churchill Downs (G2). Hard to know what to expect in this salty Grade 1. Toss.

2. Mischevious Alex (2-1 – Into Mischief – Saffie Joseph Jr. / Irad Ortiz Jr – 13: 7-1-2 - $714,730) This 4-year-old son of Into Mischief was up against the race flow in the Met Mile (G1), but he fought valiantly down the stretch to finish third. The top two finishers in that race were better suited to get the mile distance and now, Mischevious Alex cuts back to the favorable distance of six furlongs. He has never lost going today’s trip. Top Choice.

3. Firenze Fire (3-1 – Poseidon’s Warrior – Kelly Breen / Jose Ortiz – 34: 14-5-3 - $2,534,350) You can only admire the outstanding record of Firenze Fire, who moved from the Jason Servis barn to run for Kelly Breen. This year he has two graded-stakes victories at Belmont Park and a recent head loss to Mind Control in the Nerud (G2) at the beginning of July. The 6-year-old hit the board in his last six races. There is a lot of speed in the field of nine which will make provide a lot of pace pressure on Firenze Fire. Win contender.

5. Three Technique (15-1 – Mr Speaker – Jeremiah Englehart / Manny Franco – 14: 3-4-4 - $335,390) Since trainer Jeremiah Englehart has kept Three Technique sprinting, his performance has improved. Most recently, he was third in the Nerud after attracting a lot of action at the betting windows. He gets blinkers on for the first time. He prefers to stalk the pace and make a closing move. The Vanderbilt does present a class challenge for this 4-year-old. Toss.

6. Whitmore (4-1 – Pleasantly Perfect – Ron Moquett / Ricardo Santana Jr. – 41: 15-13-4 - $4,434,350) Most of the time when horses get to be 8-years-old they lose a step, but this is Whitmore that we are talking about. In his final race last year, he won the Breeders’ Cup Sprint to lock up an Eclipse Award. This year he is winless in three starts including two at his home track, Oaklawn Park. However, Whitmore is the winner of 13 races at the six-furlong distance with his trademark late run on the outside. As a past winner at Saratoga, the Ron Moquett trainee should get an ideal set-up. He has run so many great races in his career that you can’t count him out. Use underneath.

7. Miles Ahead (12-1 – Competitive Edge – Rusty Arnold / Luis Saez – 16: 8-2-1 - $260,960) Miles Ahead moves north after racing at Gulfsteam Park where he won the Smile Sprint (G3) at the beginning of the month. He will switch from the barn of veteran trainer Eddie Plesa to that of Rusty Arnold. New rider Luis Saez is likely to stalk the early pace. This Grade 1 will be a class challenge. Toss.

8. Montauk Traffic (15-1 – Cross Traffic – Linda Rice / Eric Cancel– 9: 4-1-0 - $214,200) Montauk Traffic flashed some talent in the winter of his 3-year-old campaign when he won the Jimmy Winkfield at Aqueduct. It looks Linda Rice has got him back on track with two wins and a close second in last three starts. He is a deep closer who will get a ton of speed to follow and that gives him a chance. At long odds, he may be worth a play in the exotics, just in case the pace collapses. Use underneath.

9. Special Reserve (9-2 – Midshipman – Mike Maker / Joel Rosario – 20: 7-1-7 - $418,647) This 5-year-old is in the best form of his career with four wins from his last five starts including stakes wins in the Iowa Sprint and the Marlyland Sprint (G3) in his two most recent races. In those two victories, he earned triple-digit Beyer Speed Figures. Trainer Mike Maker has a Saratoga barn loaded with horses that are ready to run. The change to Joel Rosario indicates that they will look to sit behind the early pace from the far outside. Win Contender.

Summary: Mischevious Alex has been training smartly for the Vanderbilt after running third in the Met Mile (G1) which set up perfectly for the horses that preferred more distance. Now, Mischevious Alex is in the right spot cutting back to six furlongs making him the horse to beat in this salty Grade 1.

The betting strategy will be to use the morning line favorite Mischevious Alex with some late running horses like Montauk Traffic, Special Reserve, and Whitmore.