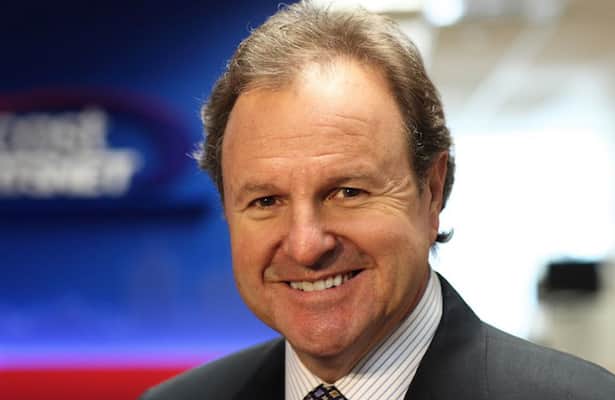 Veteran sportscaster Bob Neumeier, who covered horse racing for NBC Sports and became nationally familiar handicapping the Breeders’ Cup since it began in 1984, died Saturday, according to friends and family.

“We were very saddened to learn today of the passing of Bob Neumeier,” the Breeders’ Cup said in a statement written Sunday afternoon. “Bob was a big part of the NBC Breeders’ Cup World Championships broadcasts for many years as a handicapper, reporter and analyst. Bob brought his expertise of Thoroughbred racing and a great sense of humor to every show. We extend our sincere condolences to Bob’s wife Michele and to his extended family.”

Beside his role with NBC, Neumeier worked for decades in New England media. He did announcing for the Boston Bruins, was a sports anchor for WBZ-TV, was the New England anchor for Comcast SportsNet and hosted a midday show on all-sports WEEI Radio.

Durkin remembered Neumeier as "a joy to be around."

"Neumy," as he was widely known, "was just a very talented person," Durkin told Horse Racing Nation. "And in several fields. I mean, not just as a broadcaster – he did hockey play-by-play for the Boston Bruins. Now people think that calling a horse race is hard. I have no idea how anybody can do play-by-play for hockey as well as Bob. It's lightning fast.

"But his first love was horse racing. He loved the game. He was a very good horseplayer. He won handicapping contests. He conquered the Pick 6 a couple of times. I mean, he was a really good horseplayer. And along with that he had great passion for the game."

Neumeier was hospitalized for a stroke in 2014. Durkin said he had been sick for several weeks.

Another industry veteran, Joan Lawrence, told HRN, "I had the privilege and honor to work with him when I was involved full time in horse racing with NTRA (National Thoroughbred Racing Association) and working the events in the winner's circle. To be a part of watching Bob work, he was fabulous. He was a great horseman, analyst, fun, smart. A wonderful man. I don't know what else to say he was professional, kind. And as a friend, as somebody I knew on Tom's parties and stuff, he was just a lovely, lovely person. It's a sad day."

Neumeier was born in Weymouth, Mass., and was a graduate of Syracuse University.