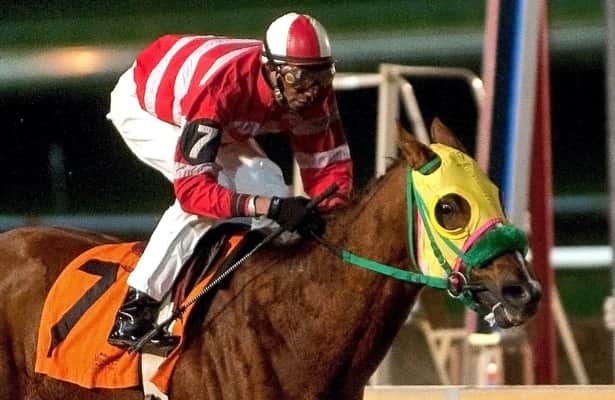 DeShawn Parker, the 5-foot, 10-inch jockey who in 2010 became the first African American rider since 1895 to lead all American jockeys in races won, now can add another coveted achievement to what has been an incredible career, as he has been selected by a vote of jockeys nationwide as the winner of the 2021 George Woolf Memorial Jockey Award.

Presented annually by Santa Anita since 1950, the Woolf Award can be won only once. One of the most prestigious awards in all of racing and named for the legendary late Hall of Fame jockey who gained national fame when an estimated radio audience of 40 million tuned in as he piloted Seabiscuit to victory over Triple Crown Champ War Admiral in a match race at Pimlico Race Course on Nov. 1, 1938, the Woolf Award recognizes those riders whose careers and personal character garner esteem for the individual and the sport of Thoroughbred racing.

The Woolf Trophy is a replica of the life-sized statue of the legendary George Woolf that adorns Santa Anita’s Paddock Gardens area.

A Cincinnati native, Parker, 50, outpolled four other Woolf finalists — Alex Birzer, Jorge Martin Bourdieu, Kendrick Carmouche and Aaron Gryder — all of whom have plied their trade with notable distinction at tracks across North America.

The 2021 Woolf Award win comes on the heels of the passing of Parker’s mentor and father, Daryl Parker. A longtime highly respected Ohio racing steward, Parker passed away from cancer in Cincinnati on March 4.

“My idol, my best friend and a great father!” Parker tweeted on March 5. “He meant so much to my life and my career. I can only hope to be as great as he was. I’m going to miss my Dad so much, but I know he’s in a better place with no pain and living his life to the fullest up there, hanging with friends and family and talking up a storm!”

In a sport with much smaller athletes, Parker has long “stood out,” but his character, ability and work ethic are factors that have far outrun initial perceptions that perhaps he was too big to be a jockey. America’s leading rider with 377 wins in 2010, he came back to lead all jockeys again in 2011 with 400 trips to the Winner’s Circle.

Born Jan. 8, 1971, Parker was a perennial leading rider at Mountaineer Park in West Virginia for more than 20 years. Parker, who through March 16 had 5,841 career wins, also has enjoyed considerable success at Indiana Grand, leading all riders in 2020, and at Sam Houston Race Park, where he was the leading rider in 2015.

Married with two children, Parker lives in East Liverpool, Ohio. The 2020 Woolf Award was won by Luis M. Quinones, and DeShawn Parker thus will become the 72nd jockey, dating back to Gordon Glisson in 1950, to be so honored.

Because of uncertainty surrounding COVID-19 restrictions, the 2021 Woolf Award ceremony will be conducted at a date to be determined.