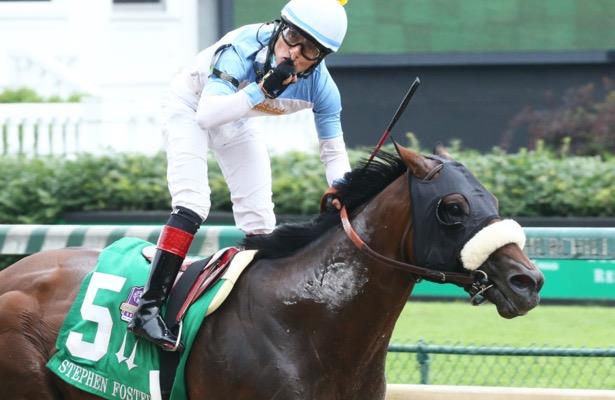 The old veteran Tom’s d’Etat proved Saturday that, as a 7-year-old, he’s still at the top of his game.

Tom’s d’Etat rated and then pounced for a dominant victory at Churchill Downs in the Grade 2, $500,000 Stephen Foster Stakes. The son of Smart Strike covered the 1 1/8 miles under the Twin Spires in 1:47.30 – nearly two seconds faster than star mare Midnight Bisou went the same distance one race prior in the Fleur de Lis (G2).

“The fountain of youth, he’s got the secret to it,” trainer Al Stall Jr. said.

#5 Tom’s d’Etat (6/5) with a monster performance in the Stephen Foster (G2)! pic.twitter.com/OfIW6yOQPl

After injuries limited Tom’s d’Etat through much of his earlier career, the G M B Racing runner finally made his graded stakes debut last season as a 6-year-old. He entered Saturday on a three-race win streak that included the Fayette Stakes (G2) last October at Keeneland, the Clark Stakes (G1) a month later at Churchill and then his 7-year-old debut April 11 in the Oaklawn Mile Stakes.

Riding that hot streak, Tom’s d’Etat went off the 6-5 favorite Saturday in the Stephen Foster against seven other older horses.

With regular jockey Joel Rosario riding Saturday at Belmont Park, Miguel Mena got the mount on Tom’s d’Etat on Saturday. Mena let the horse go towards the front out of gate No. 5, and he sat just behind Pirate’s Punch’s fractions of :23.89 and :48.13.

Tom’s d’Etat moved up in the second turn and took command. By My Standards – who entered the Stephen Foster on a three-race winning streak of his own – gave chase but didn’t have enough for the winner.

Tom’s d’Etat returned $4.60. By My Standards stayed up for second ahead of his stablemate Silver Dust in third.

“I knew he was a lot of fun to ride him in the morning but didn’t realize how much fun he was in the afternoon," Mena said. "I owe everything to Al for giving me the opportunity to ride such an impressive horse. He was going along so easy and I just asked him for his attention a little bit at the top of the lane and I didn’t even have to really step on the gas.”

The victory carried with it a “Win and “You’re In” ticket to the Breeders’ Cup Classic, scheduled for Nov. 7 at Keeneland. That race will come 10 years after another of Stall’s stars, Blame, beat Zenyatta in the 2010 Classic.

"We knew coming into this race he was a fresh horse but ran so well fresh in the past," Stall said. "This will set him up to be in good shape for the rest of the year. I think he’ll benefit a lot from this race but we’ve sort of been waiting for this horse to get into form with the breaks in his races, but he’s finally got there. That was a very impressive performance today.”