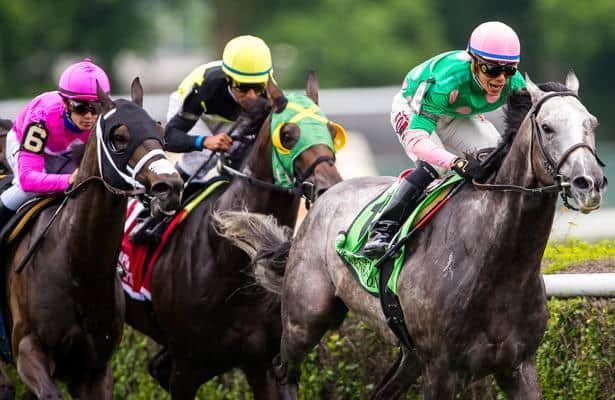 Christophe Clement, who topped the trainer standings with 15 wins heading into Wednesday's card at Saratoga Race Course, will look to add to his impressive numbers when he sends out Pure Sensation and Shekky Shebaz in Saturday's Grade 3, $200,000 Troy Stakes over the Spa's Mellon turf course.

The Troy, a 5 1/2-furlong turf sprint for older males, is one of five graded races on a loaded Travers Stakes Day card headlined by the Grade 1, $1 million Travers at 1 1/4 miles for 3-year-olds.

The card will be broadcast on Saratoga Live on FOX Sports and MSG Networks.

Pure Sensation wintered at Payson Park in Florida and made his seasonal debut with a seventh in the Grade 1 Jaipur on June 20 at Belmont Park. He posted a pair of turf works following the Jaipur, including a bullet three-eighths in 37.23 seconds on July 31 on the Oklahoma training turf.

"I was very disappointed with his race in the Jaipur. He was in a speed duel that day and I hope it's the reason that he ran poorly," said Clement. "He came back and had a very good work on the turf the other day here. He worked well and looks well."

"He's 9-years-old, so we'll go one race at a time with him," said Clement. "It's an important race for him as he has to do well in order for me to carry on. He's a very good-looking horse. He still looks very well and he's very sound."

Kendrick Carmouche, who had guided the gelding to seven wins, has the call from post 5.

Michael Dubb, Madaket Stables and Bethlehem Stables' Shekky Shebaz owns a record of 21-6-5-4 with purse earnings of $382,400 and will look to make the grade in his fourth start of the season.

The 5-year-old Cape Blanco gelding finished third in the 2019 Grade 1 Breeders' Cup Turf Sprint in his graded-stakes debut. Last out, making his first start for Clement, Shekky Shebaz closed to finish third in the 5 ½-furlong Wolf Hill at Monmouth Park.

"He's had one start with us and ran fair at Monmouth," said Clement. "He ran wide all the way. He also looks good and trained well on the grass here. Irad knows him well, so we'll give him a shot."

Breeze Easy's Imprimis, a seven-time winner from 13 starts for trainer Joe Orseno, is winless in four starts since taking the 2019 Grade 2 Shakertown in April at Keeneland.

The 6-year-old Broken Vow gelding shipped to Ascot last June for the Group 1 King's Stand and finished sixth. He returned stateside for a three-race fall campaign that included a fourth in the Grade 3 Runhappy Turf Sprint at Kentucky Downs; a third in the Grade 2 Woodford at Keeneland and a sixth in the Grade 1 Breeders' Cup Turf Sprint at Santa Anita.

Jose Ortiz, who guided Imprimis to victory in the 2018 Wolf Hill at Monmouth Park, will pilot Imprimis from the inside post.

*Rating is based on HRN fan votes, which rank the Top Active Horses in training.
Pure Sensation Troy Troy (2020)